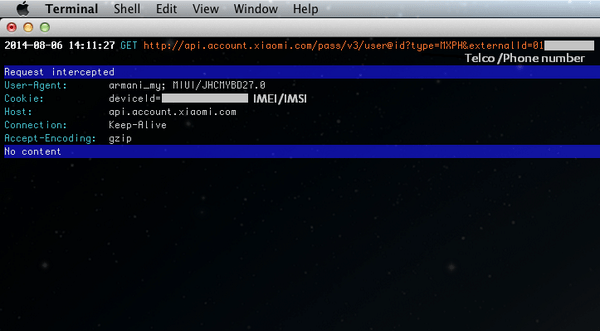 Few days back a Xiaomi Redmi 1S was caught sending data to Chinese servers, many blogs and news channels and in response Hugo Barra, the Vice President at International Xiaomi in his Personal Facebook Timeline as well as on Xiaomi’s Page made a post saying that Xiaomi doesn’t sends any personal data to Chinese servers. The MiUI comes with MiCloud Feature which enables the user to store the data on the Cloud but that can also be turned off, said Hugo Barra.

[alert-note]Data Sending to Chinese servers is confirmed in Xiaomi Redmi 1s, it’s not with the Mi 3 or the other phones but as they are manufactured by Xiaomi, it can happen![/alert-note]

Here’s the Screenshot of the Post made by Xiaomi on their official Facebook Page which says that Xiaomi doesn’t transfers any data without the User’s knowledge and in the post Xiaomi also mentioned that Xiaomi requests for Text messages from the messaging App? I was confused and made out a comment on the page. Beside Xiaomi’s post is the screenshot of a comment made by me.
{adinserter 1}

The above comment was copied by a Person on the Fan page and  he made the comment on Hugo Barra’s timeline and there Hugo Barra gave a reply but it was not a satisfying to many of the  people including me! Here’s the comment made by the person.

Reply by Hugo Barra on the his timeline post

Many of the Bloggers and Friends of mine remained unsatisfied by the Answer given by Sir Hugo Barra, It was just like Not giving a key to the person but giving the person a technique to break the lock! I Felt the same and today when I came on Facebook, one of my Friend posted about Xiaomi sending data Like “Your Contacts“, “Your IMEI number“, “Your IMSI Number (MiCloud)“, “Your Text Messages” it was found by People at F-Secure that How Xiaomi Sends data to Chinese servers and the above mentioned data was literally sent. Have a look at the image shown below which shows “How was it confirmed that Xiaomi Sends Data to Chinese Servers”

So what is Xiaomi Up to? Many people say that even Apple does that, so does Google, but we know that the probability of they using our Data for wrong use is very less, but Xiaomi being a Chinese Company can use it for wrong use, as China is known for Spying. Till now it is known that Xiaomi Sends data to Chinese servers which includes the above mentioned, but in this news it is not known about, Images and other personal data but it might be the case that they are sending and we are not knowing about it? or it might be the case that Xiaomi will later do the same with the Mi Series smartphones? It may happen that Xiaomi may do that with the Release of MiUI 6 on August 16? Nothing can be said, But to be on a Safer Side it would be better to go with an alternate Brand. At DroidMen I’ll update you as soon as I come to know more about this thing!