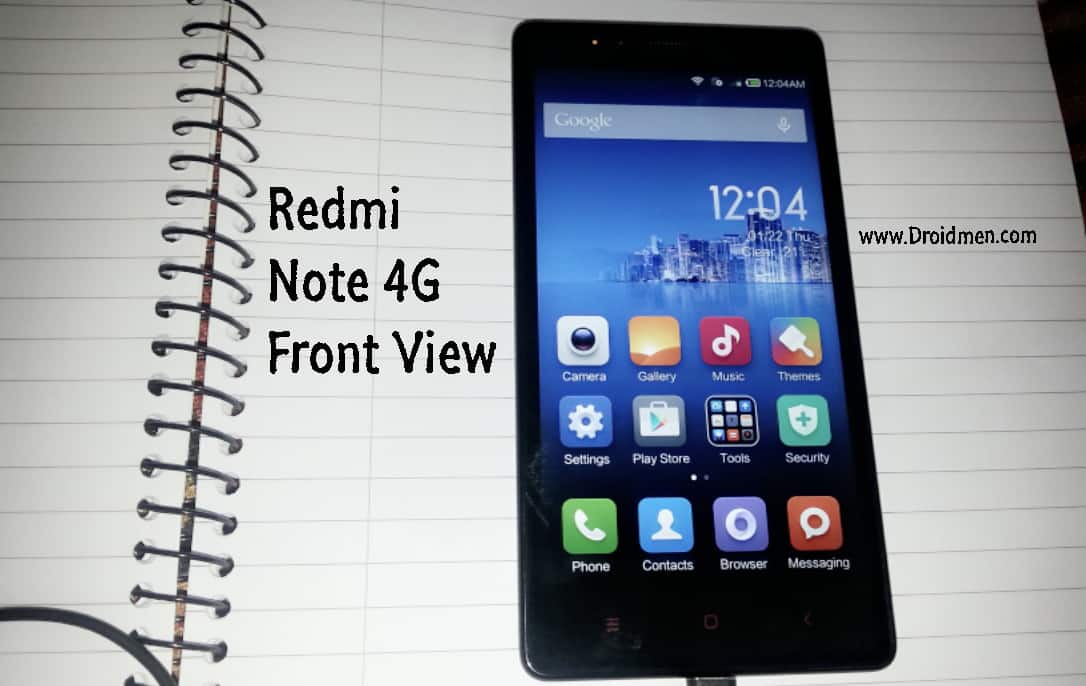 Xiaomi Global, the Chinese Smartphone manufacturer has always rocked the Indian Smartphone market, Every time Xiaomi comes with a new Product Flipkart, the Indian e-Commerce Giant’s server goes down. Starting from the Xiaomi Mi 3 which was followed by the Redmi 1S and then now comes the Redmi Note 3G and the Redmi Note 4G. Xiaomi also announced the Mi Note, Mi Note Pro, Mi Box mini and Mi Headphones.

The wait has come to an End! It has not been much long, since Xiaomi has launched the Redmi Note 4G in the Indian Smartphone market and We’ve managed to get a Xiaomi Redmi Note 4G for a detailed review on it. Without wasting a second more on what’s up with Xiaomi let’s get deeper into the Redmi Note 4G.

The Redmi Note 4G operates on the Favorite Android Operating system. It comes with Android 4.4.2 KitKat pre-installed in it.  The interface is powered by Xiaomi’s home-produced user interface i.e MIUI v5. This 28th January, Mi is going to Launch Xiaomi Mi 4 and MIUI V6 which might bring in Lollipop for the Redmi Note 4G. For now, Here’s how the UI Looks like.

The rectangular shaped Redmi Note 4G has a Plastic Body which doesn’t looks much premium, but it looks sober and the body is very smooth which gives you the feeling that there is a tempered glass plated on the Plastic body. It would have been great if Xiaomi would have come up with a Metal Body in this Phablet.

The MIUI is what you will be seeing when you see the Redmi Note 4G’s screen. Above the screen sits the earpiece and besides the earpiece sits the Front-Facing Camera. Below the screen, at the bottom the “Navigation Buttons” are placed which helps in navigation while using the Phone. The Navigation buttons glow “Red” when pressed or when there is any activity that takes place on the screen.

The Back has curved edges and is not sharp like the Samsung Galaxy Note Series. The Camera is placed at the top (center) of the Phablet and below it sits the Flash which would be a support to the camera when it is dark.  At the Bottom, in the center there is a MI Logo and to its left side there is a speaker.

After knowing, the Redmi Note 4G from the front and the back, let’s have a look at the Top, Bottom and the Right side. The Top of the Phablet there is a slot for the 3.5 mm audio jack which is almost compatible with most of the earphones or the headphones we buy these days.

At the Right-hand side of the Phablet there is a Single volume button which can increase as well as reduce the sound and below the Volume button, we have the most important button without which we cannot Start/Lock the Phablet i.e the Power Button.

At the bottom of the Phablet we have the Charging Port from which the Phablet can be charged, This port facilitates Data cable connection and OTG can also be inserted in this Port.

The Redmi Note 4G encompasses a Qualcomm Snapdragon MSM8928 Quad-core processor which is clocked at 1.6 GHz processor, alongside there is a 2 GB RAM which would be storing the temporary data while the processor is processing data. The phone runs pretty smooth, I managed playing Asphalt 8 and the NFS Most wanted 2 on the Phone, there were no lags while playing the game. But when there were some notifications/calls coming while playing the game, it lagged a bit. But that doesn’t makes the performance go down, as even the High-end Phones which I’ve used faces this issue.

Switching between One App to another app was quite fast and the time taken for an App to get loaded was incredibly fast and on top of all, how many ever apps I opened while using it, I always had around 1 GB of the RAM Space free, which is sign showing the way the processes are handled is very efficient. The best way to measure the performance of a Phablet or a Phone is to check the Benchmark scores, though personally testing is another way to know the Phone in detail, but all don’t get the Phablet, so we performed the below listed “Benchmark Tests”

In Antutu Benchmark the test result was not stable, it sometimes scored above 18K, and sometimes it went below 17K. However after 5-7 times testing it just gave me a hint that, it scores around 18K on an average. Here’s the video in which the recording of a Redmi Note 4G on which the test is taking place.

Xiaomi has never compromised the Camera Quality in any of the Smartphone’s/Phablet’s it has manufactured, the same is with the Redmi Note 4G.  The Redmi Note 4G comprises a 13 MP BSI Autofocus Primary camera and a 5 MP front facing camera. The Stock MIUI Camera app looks neat and comes with a very simple user interface which makes capturing of moments in the form of photos much more easier than it was. Talking about the Camera app when you are using the rear camera, the camera app comes with many filters which can be used to give some effects while capturing.

There are already many apps like “Camera 360”, “Instagram” etc, which allows us to give filters to the Images while we capturing them, however those apps sometime suck, because of the RAM usage and issues with the Kernel. However, the experience with the Stock Camera app and the filters it had were awesome, with awesomeness, it gives a smooth experience as well. Here are some Images captured using the Filters :

Although Xiaomi has placed high-end cameras on both the sides, but the 13 MP Rear camera doesn’t gives the Image quality as it was expected, though the quality was good. But it could have been the Best, if Xiaomi would have worked good on Image processing. The issue of Image Processing can be solved easily by using apps such as “Camera 360” as it does a great processing of images and is able to give good quality pics even with low-end cameras.

The Battery Life was superb, in simple words “I Loved the Battery Life”. The 3100 mAh Battery was able to give a standby of 20-24 hours on an average 20 hours of standby with 200 minutes (3.20 hours) of screen usage, while using it for the 200 minutes, it was connected to Internet using WiFi for some minutes.

Coming to the Battery life while using it on 3G Network continuously. The Phone was able to stay alive for 5 hours while it was continuously used for surfing, Facebook, and WhatsApp (while we tested). The display consumes most of the battery hence we conclude that, if the screen usage is reduced the battery life can increase by around 30%.

Coming to the charging part, The Redmi Note 4G gets charged quickly when it is charged using an original charger which came with it in the Box, However, while charging it with some another charger I noticed that it took more time to get charged.

The Redmi Note 4G is a decent Phablet which comes with a Large-Good Quality display, has a great camera and good processor-ram combination. Concerned with the performance, The Redmi Note 4G works great, and is very smooth while loading, switching apps. The 3G variant of this Phablet, though comes with a MediaTek Chipset, it beats this phone while coming to the performance, so if you are someone who uses 4G for communication or internet usage, then you may go with this Phone, But if you don’t use 4G and are not much concerned about the Chipset then you can go with the Redmi Note 3G.