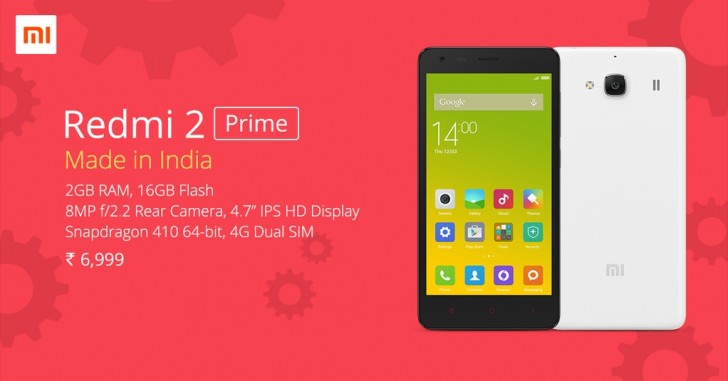 The Apple of China (Xiaomi) launched the Redmi 2 Prime at a price of Rs. 6, 999 in India. Foxconn has tied up an assembly line with the state of Andhra Pradesh to start assembling Redmi 2 Prime. This also boosts the “Make in India campaign“.

{adinserter 3}According to Hugo Barra, “It’s not only about designing for India, we want to make in India and be closer to our consumers” . The Redmi 2 Prime is obviously a variant of the Xiaomi Redmi 2 that was launched previously. Let’s see how it clone its sibling.

Redmi 2 Prime operates on Android OS 4.4.4 Kitkat with a MIUI that is yet to announced. It has Adreno 306 GPU and 64 bit Qualcomm Snapdragon 410 quad core processor based on Cortex A53 clocking at a speed of 1.2GHz.

The Redmi 2 Prime sports a 4.7 inch IPS LCD capacitive display with a screen resolution of 720 x 1280 pixels (~312 ppi). It will be operating on the latest MIUI 6 and will get the MIUI7 which is soon getting launched. The screen will be protected by a Gorilla Glass or not is yet to be confirmed by the manufacturers. The phone comes in two colors – White and Dark Grey

The Redmi 2 Prime comes with 2GB RAM on board. In terms of storage, you have 16GB internal slot. And the external slot can be expanded up to 32 GB with the help of microSD card slot. These days people usually prefer having phones with more internal storage.

Redmi 2 Prime is a dual SIM phone supporting GSM, HSDPA and LTE. It has the following connectivity features:

Some other features of the phone includes loudspeaker and a 3.5 mm jack slot for headsets. It has four sensors – accelerometer, gyroscope, proximity and compass. Xiaomi Redmi 2 Prime has active noise cancellation with dedicated mic.

The phone has been launched at Rs. 6,999. If you are in for an exchange (after fulfilling Flipkart’s terms and conditions) then you can get it at Rs.4,999 only. Or you can also get it at the MRP from Amazon or Snapdeal as per your convenience.