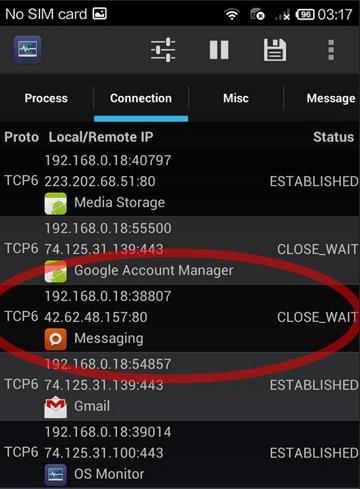 Micromax, the Indian consumer Electronics company Launched the all new Micromax Canvas L A108 Silently, Many people were not even knowing about it. Similarly Xiaomi is sending your Personal data to China Silently without your Permission either. Shocked, Below there is another thing which will make you more shocked!
{adinserter 1}

A user in Hong Kong who was using the Xiaomi Redmi Note captured some screenshots from his device and claimed that the Phone was connected to a Server located in China. He said

The Server is receiving photos and tests from the phone when a user is connected to a WiFi network and will continue to send the data from your device even if you flash a custom Firmware. So whatever ROM you install the device will not stop sending the data!

Wasn’t this more shocking than the headline? to me it is, as installing another firmware enables you to get rid of the Firmware and some services which comes with the firmware. But even after switching to another firmware you’re data will be transferred to the Chinese servers.

Who is involved in the Silent transferring of your Data, if MiCloud Backup is of?

Xiaomi has offered great devices for less prices, One of them is the Mi 3, which rocked the Indian market, having 1 Lakh registrations in the First Batch, and in the second batch of the Mi 3 phone got sold within 5 Seconds of the commencement.

So are you still going to buy the Xiaomi Mi 3 Smartphone during the 3rd Batch sale on Flipkart? Do you consider Money more important or your data? I consider the data more important, just imagine – How can the Data be misused? In India many people don’t even share their Images with their Friend thinking that they might misuse it? So how will a typical Indian react to this? Personally I as an Indian would not encourage/recommend anyone to buy the device and as a Human Being won’t tell any person to buy the device.