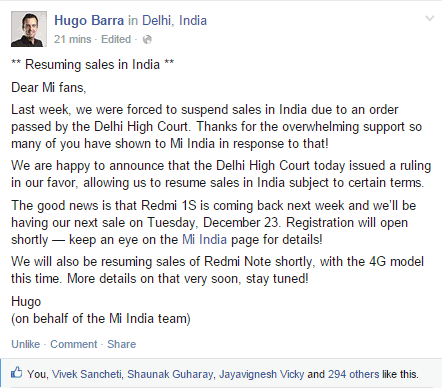 Xiaomi to Continue Sales in India; Redmi 1S coming Back at 23rd December

Recently the Delhi High Court Banned Xiaomi to Sell Products in Indian market. Xiaomi was temporarily banned from Selling Smartphones in India because of Infringement of Ericsson’s Standard Essential Patents. But today Hugo Barra, VP at Xiaomi Global announced on Facebook that “Xiaomi will continue sales in the Indian market”. Below screenshot shows the announcement made by Mr. Barra.

Anyone thinking to sell Smartphones in the Indian market can take all the problems faced by Xiaomi and work on it before beginning the Sales. When Xiaomi brought it’s first Smartphone “Xiaomi Mi 3” in India, the biggest issue it faced was “Transferring of Data to Chinese Servers” Solving that took more than 15-20 days and this concept made a bad impression of Xiaomi in the minds of the Indian people, but they were not able to stop themselves from buying Because of the Less price but still many people still fear buying Xiaomi products.