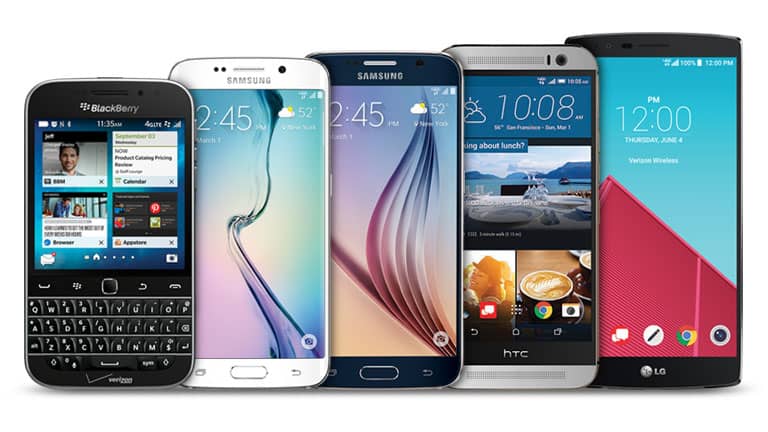 Verizon Wireless has been one of the known carriers all over the world. The carrier competes AT&T, Sprint and T-Mobile. The carrier has a great number of users using it and comes with attractive plans. While selecting the phones which are manufactured by the carriers, the cost of the phone isn’t much important, what matters the most is the carriers serviceable area, plans and the way the customers get support.

{adinserter 3}We’ve already written an article for people in India for selecting, the Best Sony Xperia smartphone between 10,000 INR to 25,000 INR. Well, in this post we will just be talking about the Top 5 verizon devices which rule the other verizon devices.  However, we’ve not applied any constraint anywhere, and the post has been written based on the ranks and the performance of the phones.

So, you’ve decided that you want to go with Verizon wireless as your carrier? Selecting the one of the best has always been difficult and confusing. However, one cannot buy the whole office so going with one of the best phones would be the best choice.

I’m pretty sure you were expecting this one on the list. The Samsung Galaxy S6 has a 5.1 inch Super AMOLED display with a resolution of 1440 x 2560 pixels. The screen come encased in a Gorilla Glass 4 on its screen to keep it away from cracking.

Even with a larger display as compared to its predecessor, Samsung has successfully managed to keep the phone weigh on the lighter side i.e. 138 grams only. The back panel of the phone also has a Gorilla Glass 4 casing. The phone is a single SIM(nano-SIM) phone. It supports GSM, HSDPA and LTE. Other wireless connectivity features includes the Wi-Fi 802.11 a/b/g/n/ac, Wi-Fi Direct and hotspot. It also has Bluetooth, GPS, NFC, Infrared port and microUSB.

The Samsung Galaxy S6 Edge has a non removable Li-Ion 2600 mAh battery with a talk time of 18 hours and music play of 50 hours.

This little beauty of HTC is also known as HTC Hima. The Verizon HTC One 9 phone has a 5 inch Super LCD display. The screen resolution is 1080 x 1920 pixels with a protection of Gorilla Glass 4. The phone has a single SIM phone which weighs slightly on the heavier side i.e. 157 grams.

The HTC One M9 operates on the Lollipop version of Android. It encompasses Qualcomm Snapdragon 810 chipset which has an octa-core processor and Adreno 430 GPU. All this is backed up by a 3GB RAM.

In terms of storage, HTC One M9 has an ample of 32GB storage in internal memory along with external memory which can be expanded up to 128GB. The singled SIM phone has other connectivity features such as – Wi-Fi, Wi-Fi Direct, hotspot, Bluetooth, microUSB, Infrared port, FM Radio, GPS and NFC. There are some basic sensors like the accelerometer, gyro, proximity and compass.

There are some additional features in the phone like the Quick Charge, 100 GB of cloud storage, noise cancellation with dedicated mic, etc. The Verizon HTC One M9 has a Non-removable Li-Po 2840 mAh battery that gives a talk time of 25 hours and standby of 391 hours. The phone is available in Gunmetal Grey, Amber Gold, Silver/Rose Gold, Gold/Pink.

The Verizon LG G4 is far the biggest(in size) among all the above Verizon smartphones in the list. It sports a handsome display of 5.5 inches IPS LCD display with a screen resolution of 1440 x 2560 pixels. It also has Corning Gorilla Glass 3 protection mounted on the screen. The phone is on the heavier side 155 grams.

This phone too operates on Lollipop(5.1 )version of Android with Qualcomm Snapdragon 808 processor, 1.82GHz + 1.42 GHz processor, Adreno 418 GPU and 3GB RAM. With an external slot that can be expanded upto 128GB, this phone also has an internal slot of 32GB as well.

The LG G4 has a Li-Ion 3,000 mAh battery that gives an amazing standby of 360 hours and talk time of 19 hours. Again, this phone is available in some amazing colors sch as Grey, White, Gold, Leather Black, Leather Brown and Leather Red.

It has a 3.5 inch capacitive touchscreen with a QWERTY keypad. The screen has resolution of 720 x 720 pixels. This phone too has a Corning Gorilla Glass 3 cover. Inspite of being the shortest, its the heaviest among the lot. It weighs 177 grams.

This phone is a single SIM phone too with 2G, 3G and 4G technologies. Other wireless connectivity features includes Wi-Fi, hotspot, Bluetooth, NFC, FM Radio and microUSB. The Blackberry Classic operates on the Blackberry OS 10.3.1 that can be upgraded to 10.3.2. It has 2GB RAM, Qualcomm Snapdragon S4 Plus Chipset, dual core processor clocking at a speed of 1.5GHz and Adreno 225 GPU.

Like all the above Verizon phones, this phone too has sensors – accelerometer, gyro, proximity and compass. Blackberry Classic has a non removable Li-Ion 2515 mAh battery with a standby of 348 hours , talk time of 11 hours and music play of 70 hours. Blackberry gives you a list of colors to choose your Classic from – Black, White, Blue, Bronze and Cobalt Blue.

AAndroid News
Read More
Xiaomi, the Apple of China has launched it’s next flagship in the form of Xiaomi Mi4C. It has…
GGadgets

Read More
Table of Contents What is Juul?Trends Revolutionizing the Industry1. Public Health Debates2. Online Sales3. Vaping and CBD: A…
GGadgets
Read More
LG just announced that it will be unveiling the LG gram 17 and LG gram 2-in-1 laptops at…
GGadgets
Read More
Table of Contents Reselling Factor: The phones with removable batteries get sold easily and at high-prices.Survival Factor: Which…