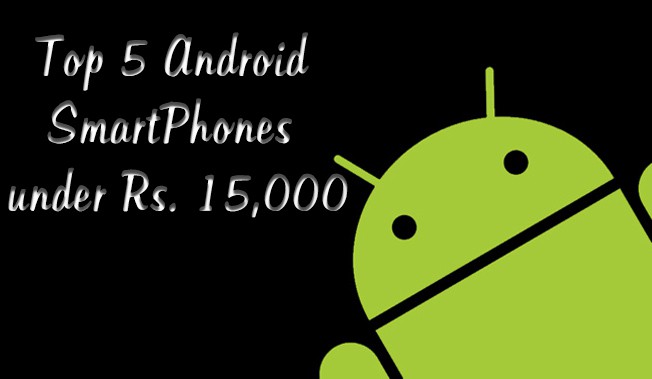 Android Smartphones have become increasingly popular today. If at some moment you are asked which android smartphone to buy, you start to think of the many options that are available. We are surrounded by just too many options (it is actually good though) when considering an Android smartphone ranging from as low as 5k to 50k. In this post We at DroidMen will share with you the list of Top 5 Best Android Smartphones under 15000 INR.

Xperia M – the “Sony smartphone with one touch functions” Sony Xperia M is one of those Android Smartphones which is fast, smooth and elegant to look at. Its design is so beautiful that you would find yourself looking at it almost every time whether there be any reason or not and it comes in 2 SIM variants but we as per our the benchmarks, the dual SIM version is better than the single SIM version. It is not a latest model but still it comes under the top 5 android smartphones under 15000 INR category because of its hardware and software cofigurations. Talking technically, The Xperia M comes with a Qualcomm Snapdragon S4 plus MSM8227 chipset which will have a Dual-core Krait processor clocked at 1 GHz in it and has 1 GB RAM for temporary storage purpose. It also comes with a 4 GB internal memory and supports SD card functionality. It comes with a 5 MP camera and a VGA secondary camera. Best suited for : If you are one of the following then you can go with this device, this device is best suited for overall moderate usage, you can play mediocre games, Social networking apps, calling and other purposes. But if you are a person who loves capturing high quality photos then this won’t satisfy you and you will feel like you did a biggest mistake as this phone has a moderate camera for general people who prefer medium quality images.

XOLO Q1010i – Seize the Moment The Q1010i android smartphone is an upgrade to the Q1010 and has been introduced with the promise of a competent camera boasting of Sony’s Exmor R Sensor. This is probably the only smartphone containing the best possible camera sensor under this price bracket. If you need a smartphone that’s capable of taking good shots even at night then you should consider this phone. Technically speaking, The Xolo Q1010i 5-inch device based on MediaTek MT65822 chipset and encompasses a Quad-core 1.3 GHz Processor and also has a Mali-400 MP2 GPU which manages the graphical tasks. It comes with 1 GB RAM which will be the temporary memory. The internal storage of the device is 8 GB and can support a SD card up to 32 GB. It has a 8 MP Primary Camera and 2 MP Secondary camera which can record videos at a resolution of 1080p. Suited For : The Intel Xolo Q1010i is best suited for People with Moderate usage, Better Photography and High-end gaming and Quality video watching, but before buying a Xolo Phone note that the Service of Xolo is not much good, so if you are a person who cares for your mobile and doesn’t uses roughly then go for it! You can do good sort of gaming because of the GPU present in it.

Moto g – Exceptional phone, exceptional price. Moto g, that android smartphone which overloaded Flipkart’s servers as soon as it was made available. Search for reviews of Moto g and you would understand it’s popularity, I would say don’t search you would have by default known about it from popular sources be it your Friend, News or Blogs. Though not being water resistant, Motorola has used a nano-coating on the Moto G that acts as light water repellent which can protect the smartphone from light splashes of water, which is still an interesting touch for a smartphone at this price point. The phone is really well built, fast and smooth and has one of the best displays under this price bracket. Technically speaking, Moto G encompasses a Qualcomm MSM8226 Snapdragon 400 chipset which has Quad-core 1.2 GHz Cortex-A7 CPU and Adreno 305 GPU built on it. When it comes to memory, it has 1 GB of RAM coupled with 8 GB / 16 GB of internal storage. It operates on the Latest Android version and has a 5 MP Primary camera and a 1.3 MP secondary camera and is capable of 720p videos @30fps and has a IPS display. Best suited for : This Smartphone is best suited for people who wants to do a great deal of Multi-tasking and wants to receive updates from Google regularly, It also has a decent camera but to experience the decent camera you have to download an External app. If you are a gamer and love high-end gaming then you can go with this device, Moreover it has a nano coating which is light water repellent!

Asus ZenFone 5 is one of those Android smartphones from Asus which has sold like hotcakes. Asus is popularly recognised for it’s excellent Motherboards but it has entered the mobile arena and is set to rock with these devices. Asus ZenFone 5 is one of the best feature built smartphone with good quality hardware and a good-looking operating system. One of it’s USP’s is the PixelMaster technology. Technically speaking, Asus ZenFone 5 has a powerful Intel Atom Z2580/Z2560 chipset which encompasses a Dual-core 1.6 GHz (Z2560) CPU and PowerVR SGX544MP2 GPU. When it comes to memory, it has 2 GB of RAM coupled with 16 GB of internal storage and is expandable up to 64 GB using an External SD card. Moving to Camera section, it contains an 8 MP rear camera with single LED flash and a 2 MP front camera. It is capable of recording videos at 1080p @ 30fps. You can find a Review of Asus Zenfone 5 Best Suited For : This phone is a high-end phone in a Low budget, so if you are the one who wants to access the High-end Features with Less Budget then this is the Best phone you would like to own. It has a Beautiful display with a High-end GPU and a Classy Camera!

Xiaomi Mi3 – Accelerate your life. One of the most affordable android smartphone with high-end specs. Xiaomi Mi3 is one of those few Chinese devices that has earned huge popularity in a short span of time. This android smartphone has the high-end specs which doesn’t mean that it has a high-price, it comes with a Huge price tag, this device comes with a Moderate or we can say that the price which is very less when it comes in comparison to it’s configurations. Technically speaking, The Xiaomi Mi3 has a powerful Qualcomm Snapdragon 800 8274AB chipset containing Quad-core 2.3 GHz Krait 400 CPU and Adreno 330 GPU. Coming to the RAM, it has got 2 GB of RAM and it will have 16 GB Internal storage, It comes with it’s own UI. It has a 13 MP Primary camera which has Flash and a 2 MP Secondary Camera of which both can do recording of video of 1080p resolution, It has a 5-inch IPS LCD display of 1920 x 1080 resolution. Best Suited For : This device is most suited for people who do all high-end sorts of job, From calling, you can do video chatting, play high-end games and also capture beautiful photographs using the Primary as well as secondary camera, it also has ample space to store, but in case you are storing many things in your device then you cannot go with this device as it has No-SD Card Slot allocation!

GGadgetsAccessories
Read More
A GPS Fitness watch, also known as a speed and distance monitor is a device that’s primarily used…
AAndroid News
Read More
Android OS is one of the most reliable OS which falls in the budget of the users, the…
AAndroid NewsGadgets
Read More
Motorola has always succeeded in their strategies to change the mind set of Indian smartphone buyers, There has…
AAndroid News
Read More
The Delhi High Court Banned the Chinese Mobile giant – the Xiaomi in India for infringement of the…