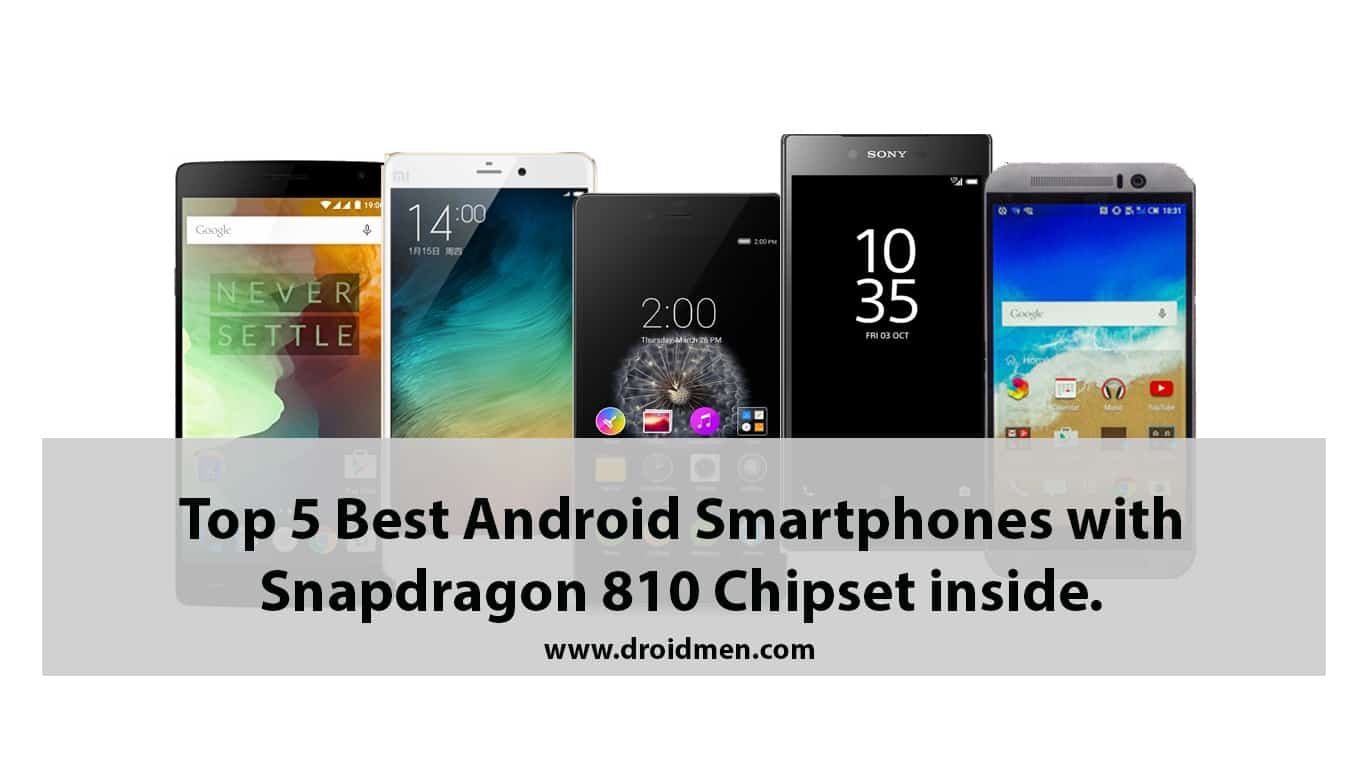 While buying smartphones, these days people think less about the brand and more about the specs. Higher the specs, higher is the demand. Previously, people did not have much choices and much brands available and had to think a lot while purchasing one.

{adinserter 3}Now people have a lot of choices and a lot of brands try to come up with new phones each and every day, However, availability of the phones is also one reason for creating confusion among people. Snapdragon 810 processor is one of the best processors till date (until snapdragon 820 hits the market). In this list, I’ll be sharing with you the top 5 devices which come with Snapdragon 810 processor.

The “Flagship Killer” in its second generation comes with not so flagship like specs but that may be a boon in disguise as the Snapdragon 810 has sometimes struggled to keep the heat output down. Coupled with a gorgeous 1080p panel that’s battery saving as well as not as taxing on the processor.

The One Plus 2 may just be the best phone touting the 810 processor on the market! It also comes with a decent 13mp camera and a fingerprint sensor all at a lucrative price point. The 64 gigs version gets 4 gigs of RAM and comes in at 389$ while the 16gb variant with 3GB of ram comes in at 60$ cheaper. Good luck buying one though as this phone is heavily in demand and remains hidden behind the walls of an invite system

With note in the name and 5.7 inches of screen to boot, this flagship offering from Xiaomi falls squarely into the phablet category. Top of the line specs at affordable prices, this is what Xiaomi promises and this phone delivers on that in aces and spades.

Gorgeously crafted with 2D curved glass in the front and 3D curved glass at the back all brought together with the metal frame that holds it together. The external is a bit iPhone esque especially with chamfered edges, and MIUI is as iOS as Android could get, but that doesn’t detract from the premium experience this device offers. The gorgeous 2k display and the fantastic cameras make it an awesome device if you can manage to grab one!

ZTE may not be one of the common names especially to those in the western world, but the Nubia series has been cranking out one awesome smartphone after the other. The Z9 is no exception with Snapdragon 810 at its heart! This device comes in the 5.2 inch form factor with a 1080p panel.

The stand out feature of this phone is the set of 16 MP back and 8 MP front cameras that will satisfy all your selfie as well as photography cravings! It’s also one of the few phones that have a dual sim slot and feature a top of the line processor. Apart from dual nano sim slots, this phone comes with LTE connectivity as well; all for a price of around 400$.

Sony’s flagship for the year the Z5 premium has some specs that make it stand out from the crowd. It’s the first phone to arrive with a 4k display. Among other firsts, the Z5p also includes a fingerprint sensor that is tucked in nicely with the power button.

The phone also has a 23 mp camera, and Sony promises that it will revolutionise smartphone photography. It also carries the IP68 certification like the previous flagships from Sony that protects it from the elements be it rain or dust or a quick dunk in the pool. This comes at a hefty price point, though, as the Z5 premium is expected to reduce your bank account by a cool 950$

Without a doubt the best-built phone among the lot, the latest flagship from HTC makes the list purely because of the fantastic metallic build and the Boomsound speakers.

Other than that this one has not much else going for it as the 21 MP rear snapper proved to be a major disappointment. Plagued by various issues including overheating since its launch, this year’s flagship from HTC has failed to live up to the hype. That however, doesn’t make it any less of a bad phone, especially when you can pick one up at $650. So which one are you going to settle with?