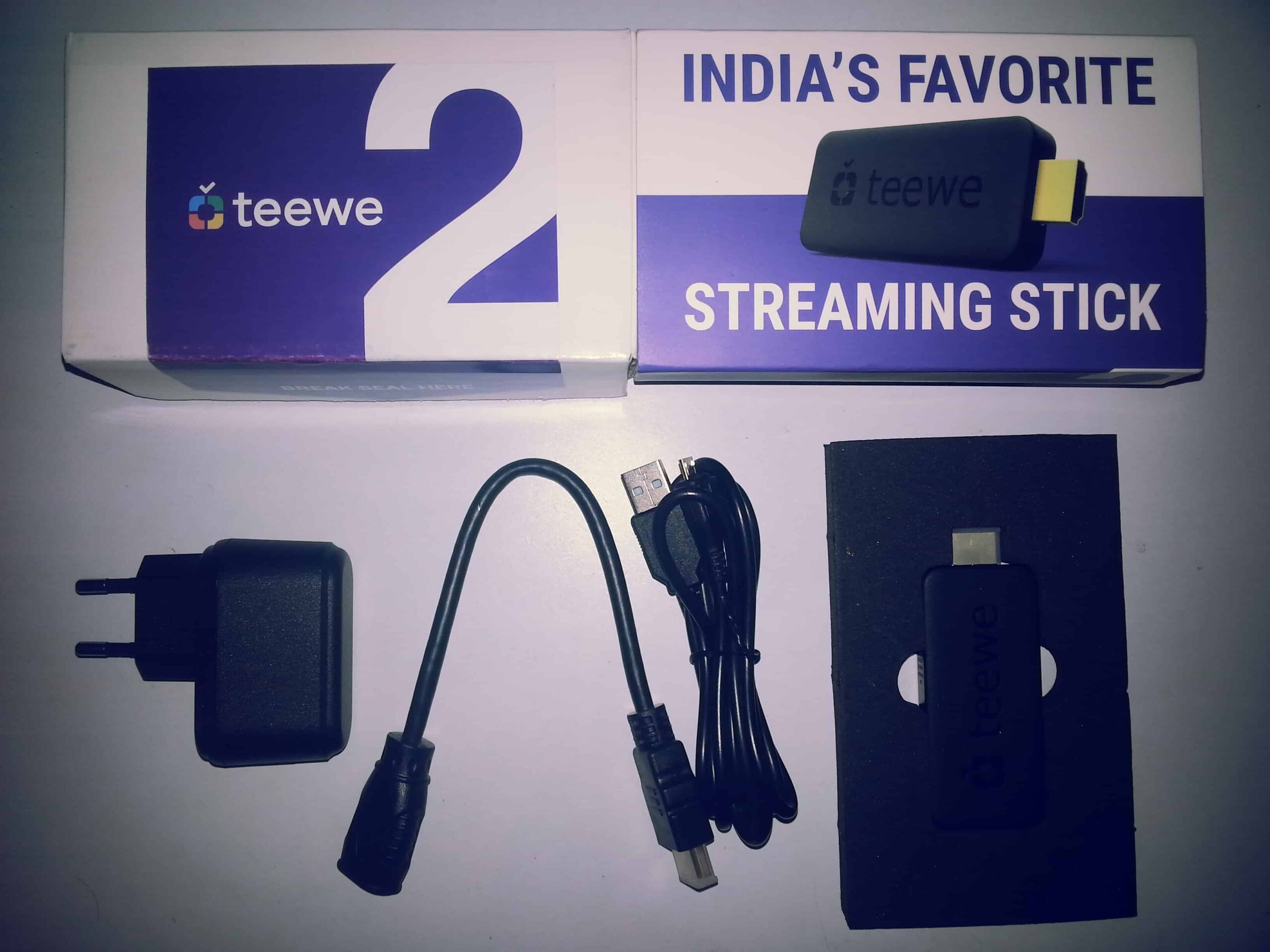 Have you ever wanted to view your Favorite videos on the television? Playing YouTube videos on “Large screen” has always been awesome. Most of the people like to view videos on Large-screen devices. Teewe helps people view the videos from their laptops/mobile phones (Smartphones) on their Television, in short it makes you Television ‘Smart’.

Teewe 2 is a HDMI dongle that allows you to stream media to your television wireless with the tap of your finger. Teewe was launched in September last year and the India-based company has announced the successor to Teewe in the form of Teewe 2. It had an edge over other streaming devices owing to the fact that it was the ONLY one available in India.

Heard about ‘Chromecast’?  It was launched worldwide two years ago. But unfortunately it came to India during last December with a price of Rs.2,999. By that time Teewe, the predecessor to Teewe 2 was already launched in India.

A Bangalore-based Mango Man launched the Teewe 2, after Teewe to overcome the short comings of Google’s Chromecast. Chromecast works great, so does Teewe 2 but there is disadvantage as well with Chromecast, you need to install Plex to stream content from laptops to television and this is definitely not the best way.

Teewe was obviously not up to the mark as compared to Chromecast. Although it was cheap, it had many loopholes. Teewe 2 is a better version of Teewe, let us find about it more.

The quality of the plastic that has been used in Teewe 2 has also been uplifted. Even in this regard, it’s comparatively as good as it’s rival video streamer device.

When we took at both the Teewe’s, we don’t see much change in them. Teewe 2 is the same rectangular structure. One side is totally consumed by the company’s logo. Also it’s is mono-color now, i.e. only Black.

Firstly, you need to download the Teewe app in your android phone/tablet or Laptops. You need to have a Wi-Fi network also. Now connect the Teewe 2 to the television. Switch it on. Once it’s done, open the Teewe app. The app will automatically detect the Teewe 2. Then a pop-up message comes to connect both the devices. You enter the password. Now your video streaming starts.

Things are slightly different if you have an iPhone. Firstly you need to download the iOS Teewe app. You have to join the Teewe’s network solely first from your handset(it has it’s own Wi-Fi network). Once done, then you may proceed to connect to you home Wi-Fi network. After all this, you may start with the live streaming of videos.

The Teewe app for Android as well as iOS are somewhat. The PC app is different, but simple as well. The homepages of the Teewe shows the videos that can be streamed from YouTube or the local videos and files are also shown in the homepage.

For playing the YouTube videos, you do need a really good internet connection. But for the local content, you surely don’t need one. The pre requisite for the local videos is only one i.e. the Teewe 2 and the phone/tablet/PC has to be connected over the same Wi-Fi network.

The Teewe app can be referred as a very smart app (in a way). It will scan your phone/tablet/PC for any sort of playable local media. Also, we know that it’s really a big task to get a decent internet connection to make live streaming viewing a pleasure. So a Teewe 2 is just the thing for us, as it automatically scans the connected device for any sort of playable media.

Another smart move of the app is shortlisting Indian TV shows, movies, songs, etc for the Indian viewers. This is another area where the manufacturers are working with other content providers so that they can get free subscription of Eros Now for the viewers. There are news that the subscription will be coming up from the month of July.

The Teewee Chrome extension is one wonderful tool which can be used to send videos from webpage to Teewe 2. This is applicable only in PC’s and laptops. The Chrome extensions support websites like ScoopWhoop, Reddit, 9Gag, Khan Academy and Coursera.

There is also news that Mango Man is working on adding up more website to the existing list of websites. You can mirror an entire webpage if you want to. For example, if you want to look up at place in Google Maps on a bigger screen then Teewe 2 can help you out with this too!

Unfortunately the screen mirroring feature in not supported in smartphones till now. According to Mango Man, adding this feature would be completely unnecessary as all the local contents are automatically detected by the Teewe 2. There will be some issues with the mirroring in case you want to play games. There would be a lot of issues with mirroring of video games as it will not work right.

Another wonderful thing to play with in the Teewe app. When you are playing videos in a bigger screen, then you can use your laptop or mobile phone as a remote control. Lets say your Teewe 2 is connected to the laptop. You start some video on TV, and control the volume, play, pause and similar kind of action from your mobile.

The Teewe app has another wonderful spec. If you have a couple of devices connected to each other in the same Wi-Fi network as the Teewe 2, you can play media from either of the devices on the TV.

In this regard, Mango Man taken a commendable step. They have forbidden the access of one mobile phone to another mobile phone and vise versa via Teewe app. This is definitely done to protect the privacy of the gadgets.

The Teewe 2 has a dual-core Cortex A9 processor running at a speed of 1.6GHz, 1GB RAM and Wi-Fi 802.11 b/g/n support. These specs are pretty sufficient for a device like this. With a decent internet connection, the videos will stream effortlessly. But with the local content, net connection isn’t a necessity.

Playing videos from YouTube is much better when the Wi-Fi connection is a very high speed one. Without an extremely good internet, you can’t really enjoy the Teewe 2’s video streaming. However, the pleasure of using Teewe 2 with an Android or PC is much better than iOS. Firstly, the local videos of PC and Android phones could be played very easily as compared to iOS. Secondly, many local content didn’t show up while going through them.

Talking about the viewing of photographs, the Teewe app will choose particularly those photos which are in the Photo Gallery only. Same about the videos as well. It will not select any videos that is present in any third-party video app. Here Chromecast has an edge over Teewe 2 because it can stream videos from a third party app.

People with Android phones can enjoy this little Teewe 2 in a much proper way. All the stored media i.e files and videos were played without an issue. Apart from videos in .avi, .mp4, .mkv; HD videos and 720p videos could also be played.

There has been issues about the Android app as well. Sometimes, the app could be used without any issue. While other times, it couldn’t be used at all. Many such problems have been reported but Android users. One effective solution to these was restarting the app all over again.

For claiming 20 GB for 3 months you are required to have an Airtel Broadband connection while using Teewe 2.  For such an awesome price and small size it has already attracted me so much, I can carry it in my pockets and don’t have to think much about the “Wires”.