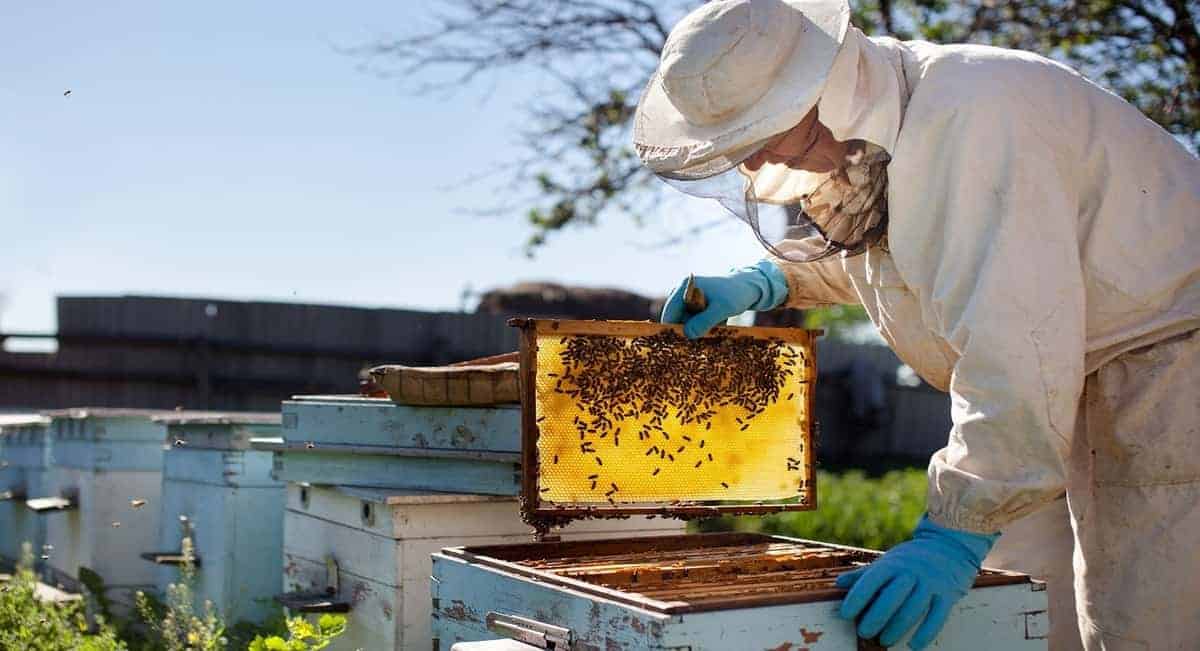 Many people don’t think much about the role that bees and honey play in our lives.  However, bees are extremely important to the earth and humans. They serve multiple functions and without them, our ecosystem will be much too far out of whack.

Bees are constantly working hard on behalf of themselves and human beings.  We often times forget this fact and take them for granted. A large majority of humans are afraid of bees, some rightfully so since they are allergic to them and will have a really bad day if they get stung.  But, aside from that, you shouldn’t be frightened by bees, you should embrace them. Why you might ask?

Bee populations all over the world are decreasing in alarming numbers.  There is not one precise reason why they are decreasing but factors such as human activity and global warming are though the be the culprits.  With global warming, the changing climate is making it harder for bees to survive. While at the same time when humans use too much of chemical fertilizers and destroy the habitats of bees destructively this also is factoring into their possible demise.

We need to take care of the bees and not destroy them.  Our food-chain and even our economy count on them to thrive.  Below are some of the key points bees play in our lives

Bees pollinate about one-sixth of flowering plants in the world.  While doing so they are helping to increase the food that comes from crops.  When bees suck nectar from flowering plants they in turn spread pollen. When they spread the pollen to other plants it helps the fertilization process.  They can also promote the growth of several different plant species by dispersing seeds.

Without pollination, many farmers will not have a healthy crop yield each year and therefore no be able to support their businesses and families  When that happens we all will run out of food or at least have much less supply of it.  And with the world population ever-increasing, this is not a good scenario for anyone.  Crops like broccoli, kale, cucumbers, and avocados will become sparse and those are important nutrient-rich foods we need to maintain our health.

Additionally, bees will pollinate commercial types of crops.  These include clovers and cotton. One role clovers play is to provide fodder for cows.  And we all know how big of a role cotton plays in our lives. Think of how many of your clothes and other items such as towels you use every day are made from cotton.

Bees are a factor in economic growth.  There are 4000 species of bees in the United States and combined they are said to contribute $15 billion worth to the countries crop industry.  That’s massive. Think that if all or half it even went away. It is interesting to note that each of the different species of bees has its own role in promoting the growth of food crops throughout the country.

The bees spread seeds, pollinate flowers, and as mentioned increase the growth of food crops from our gardens and farms.  It’s because of this that we get seeds, nuts, berries, and fruits that flourish in both wild and domestic areas. If it weren’t for the bees the growth of our food economy would be much less significant.  This also increases the number of available jobs out there. One of the ways to think about it is that the more crops produced the more people are needed to inspect them before they get to your dinner table.  If the bee population isn’t healthy the number of those jobs will decrease.

Effect Bees Have on Our Earth’s Ecosystem

As we all know the ecosystem is a lifeline to the human race.  Without a healthy or thriving ecosystem, we wouldn’t have the essentials we need to survive.  Essential elements to life such as clean air and water. We also need to have a healthy ecosystem for mineral soil.  Mineral soil is a blend of liquids, minerals, and organic matter. These components work together supporting plant life.  Mineral soil adjusts pH balance, absorbs water, and gives nutrients to plants. You’ll find nitrogen, phosphorous, and potassium in mineral soil.  Those are the three main nutrients it provides to plants. If you have the correct amount of mineral soil then you’ll grow healthy plants.

What Roles do Bees Play in a Local Ecosystem?

With simply going about their natural activities bees encourage the healthy growth of trees, plants, and flowers.  Subsequently, this operates as a habitat for other insects. Whether it be butterflies, ants, or birds; bees provide help to other species that also play a distinct role in pollination.  There are certain bee species that dig burrows under the soil to make up their habitat. What this does is aerate the soil and allow it to be healthier for a longer period of time.

Bees will produce honey to use a source of food.  They do this for times when the weather is cold. The honey bees produce can be used in several different ways by us humans.  For instance to use in tea or as jam. Honey is also used in health or cosmetic products. Frankly you almost couldn’t fathom a world without honey.

Honey is used to heal wounds, promote healthy joints and skin while also helping our hair grow.  And of course to make certain things taste better.

Bees assist in making our environment more beautiful.  This is because they help with biodiversity. They help with the growth of beautiful flowers and trees while also promoting plant growth.  This makes for an aesthetically pleasing environment. This means the ecosystem is vibrant and thriving.

What Are Some Things You Can Do?

Now that you know how important bees are to society you can help support them by doing a few simple things.  Things such as using organic fertilizer for your garden. Or, you can buy products from beekeepers in your area.  Buying local honey products helps both the bees and our economy survive.  You can also plant bee-friendly plants like berries, flowering herbs, wildflowers, and several other fruits and veggies.

Depending on the area you live and climate you can plant thyme, borage, oregano, sage, and basil.  You can also plant blueberries, strawberries, raspberries, blackberries, lavender, chives, and buckwheat.  Don’t forget cucumbers, tomatoes, squash, watermelons, pumpkins, and flowering broccoli. You can also plant lilacs, dandelions, bee balm, snowdrops, and tulips among others.

Some things to keep in mind when planting these are to keep the same plants together.  Shoot for 1 square yard of each plant. This tends to be the best measurement. You want to choose plants with successive blooms and longer blooming cycles also.  Another thing to think about is to make sure you let the plant’s flower using a tactic called deadheading. What this does is ensure the bees get the necessary pollen and nectar they need.

One last thing to remember is to provide your plants with lots of available fresh water.  A dripping hose, a small pool, sloping birdbath, or a waterfall in your backyard will do the trick.  Just make sure the water source is shallow. Also, plants with peat soil are great for bees.

What Exactly is a Bee Swarm?

A bee swarm is a way bees naturally populate. The colony gets too big for the hive and the queen bee has to leave.  She takes half of the worker bees with her to the new home. The other half stick around and draw out wax cells that form queen cells.  They also take the queen’s recently laid eggs and put them with the queen cells. Then eggs eventually hatch and larvae are given royal jelly to consume.  This turns them into new queens over time and one of these new queens will become the new queen of this original hive.

The queen and workers that left the original hive will find a structure such as a tree which is about 100 meters from the original.  The worker bees then cluster around the queen creating what is called a “ball of bees”. Now, scout bees go off to search for a new permanent home and return eventually to lead the rest of the swarm to their new habitat.

Oldooz Pooyanfar a grad student from Simon Fraser University in British Columbia, Canada has come up with a new technology that can help to monitor bees.  She’s monitoring over 20,000 bees which are housed in hives in a Cloverdale field. She’s trying to figure out what the bees are “saying” to each other and in turn, get some insight into the state of their health.

The technology that Pooyanfar has come up with uses sound from inside beehives to monitor what they are up to.  By using this system she can ascertain knowledge about the bees. She says in doing so she can help the bee population thrive and since there has been about a 30 percent decline in the bee population over the past decade in North America, this is a significant step forward.

She and others have been researching the Colony Collapse Disorder which is the decline in our bee population.  Her monitoring platform is put inside the hive along the wall. It is also fitted with small sensors which have microphones used to monitor the vibration and sound the bees are emitting.  This allows her to collect data on the sounds inside the hive which can enable her to track any abnormalities in the colony. Subsequently beekeepers can respond accordingly.

Ms. Pooyanfar is working with Worker Bee Honey Company out of Chilliwack.  She feels that getting a more clear understanding of the daily conditions and patterns of the bees from the artificial neural network within the hive will only help to bolster bee colony management.  There are methods being used already to do this, however, they tend to be disruptive to the bees activity (for up to 24 hours after the hive is opened) and they also aren’t very detailed.

Pooyanfar says, “To learn about what bees are communicating, we can either look at pheromones—the chemical they produce—or sound”  She also says “With this monitoring system, we are collecting data in real time on what the bees are ‘saying’ about foraging, or if they’re swarming, or if the queen bee is present – right now we are collecting as much data as possible that will pinpoint what they are actually doing.”

The city of Surrey, B.C. is providing the space for her research and she received funding through the MITACS Accelerate Program.  MITACS is a research grant for graduate and post-graduate students. Pooyanfar hopes to eventually manufacture a sensor package for the system.  This will help lower costs for monitoring and help beekeepers monitor hives in real-time. Initially, her research was featured in the Greater Vancouver Clean Technology Expo.

Why is This Important?

This technology is important since the Colony Collapse Disorder threatens a large part of our ecosystem and food chain.  Being able to better monitor bee activity and having a more improved monitoring system should help the problem we are facing when it comes to bees and the disorder.

Just in British Columbia alone, there are said to be over 2,300 beekeepers according to the Ministry of Agriculture.  There are also as many as 2 billion bees and around 47,000 bee colonies. Bees contribute an estimated $470 million to the B.C. economy which consists of $220 million in greenhouse crops plus $250 million in field crops.  Not to mention over $2 billion throughout Canada.

Preserving bees is becoming increasingly important to our way of life and therefor new technologies like the kind the Oldooz Pooyanfar came up with are essential.