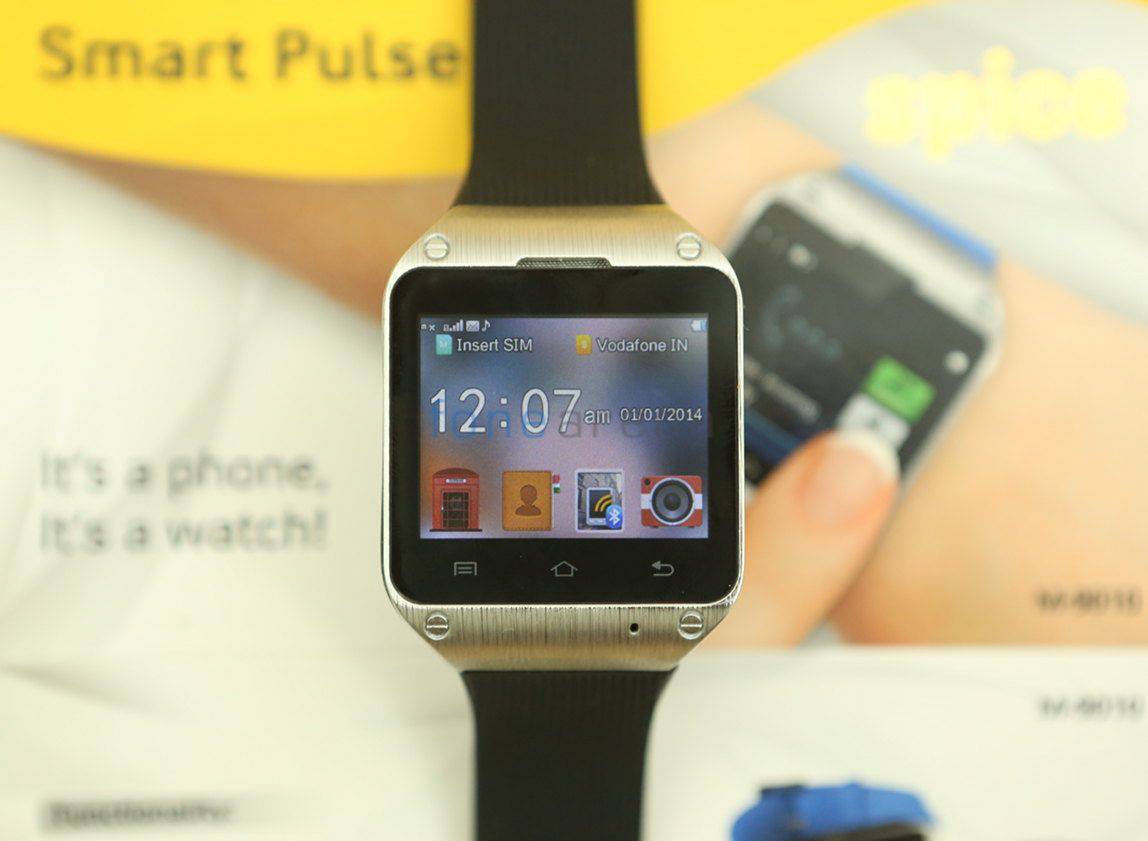 A dual SIM Phone, A camera, Music player and much more and priced awesome at Rs. 4000.

So now Let us move into the Specifications of Spice Smart Pulse M-9010 Smartwatch so that we can know some more features of it! I’ll try to cover all the things which a potential buyer would like to know before buying the gadget!

The Spice Smart Pulse M-9010 Smartwatch comes in a Rectangular Screen and surrounded by metallic Bezel on sides which makes it Premium and the screen. The Screen is surrounded by a Black frame on the sides which makes the watch look cool as well. On the right side it has a VGA Camera and on the left it has the power button and a micro-usb slot.

[alert-success]So on an Overall Basis, The Design isn’t something new, It look similar to Samsung Galaxy Gear Smartwatches![/alert-success]

Liked the Design? Only design isn’t the thing which a potential buyer would like to focus on, so now it’s time for the Cat to come out of the bag, I meant the specifications to come out!!

The Spice Smart Pulse M-9010 will operate on proprietary OS (Custom OS) and will not operate on the Android Wear OS which was designed for the Wearable Stuff and will most probably be the First Smartwatch with a Dual-SIM Slot.

It has a 1.5-inch touchscreen display with the screen resolution 240 x 320 pixels and will have built in Dual SIM card slots which will be supporting 2G networks. It will have a VGA Camera with Flash support on its right side, as shown in the above image slides and has the capacity to store data upto 8 GB.

It will also have the FM Radio Feature which will enable you to Listen to the Radio when you are not in proper touch with Internet and don’t have Songs in your Storage. It also has Bluetooth and using the Bluetooth you can connect to an Android Smartphone and play tracks on your Phone using it, the Connectivity feature also enables you to view Call Logs, Read notifications of the connected Android Phone on the Smartwatch and in Addition you can also remote capture photos with Camera on your Smartphone using it. It powers a 420 mAh Battery and all this priced at only 4000 INR? isn’t it a good deal?