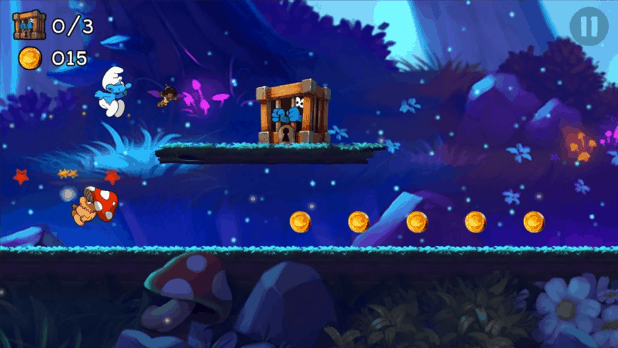 The french gaming studio Ubisoft now has one more title under its belt. Their latest game is based on the popular cartoon The Smurfs. The fans have enjoyed The Smurfs on TV and films and now they can install The Smurfs Epic Run on their android devices.

Ubisoft: “Gargamel has cast an evil fog spell to capture all the Smurfs. The whole village is gone and you’re the only Smurf left! Run away from the fog, parkour a vivid world, gather powerful magic artifacts and save all your Smurfs friends to become the true epic hero of the village.”

This smurfs adventure from Ubisoft is in the form of a 2D runner game. You play one of your favorite smurfs in order to defeat Gargamel and release the other captured smurfs. Like the Rayman Adventures game released by Ubisoft last year, this too is a auto-runner/side-scrolling platformer.

You can download the Smurfs Epic Run from here.

The controls of the game is fairly easy(like most auto runners), you tap on the screen to make the smurf character jump over obstacles and collect coins. Different Smurfs do have the ability to glide/dash and so on. While racing to the end, your character has to free the other  Smurfs caged by Gargamel. The game follows the freemium(free to play, but provides in-app-purchases) model. You can buy coins to unlock all the Smurfs to use their abilities. The game also offers gems as in game currency, to unlock other powers.

You can challenge your friends and by sending them requests via the facebook connect or keep trying to unlock the 79 achievements the game has to offer on google play services. The game occupied a good 248 MBs on my device, but the good news is that it runs very smoothly on even my low end Android One device. You can tweet about it with Ubisoft’s hashtag #smurfsrun.