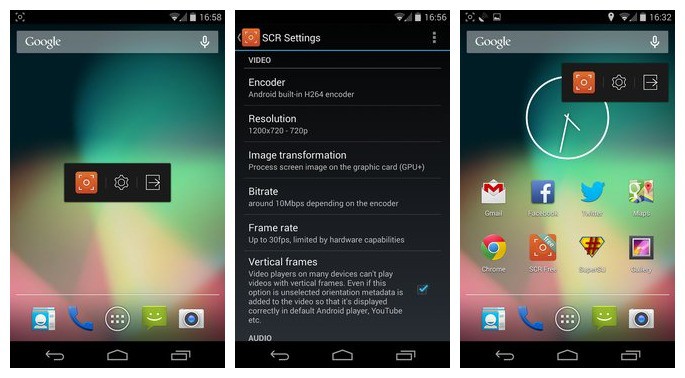 One of my Friend asked me out How to Record the Screen on my Android Phone? I said that Friend to use SCR Screenrecorder and Similar Android Apps which Facilitate Screen recording? But that the Friend told me most of the Screen Recorder Apps Require Root Access. So what do I do? I was like, Yes without rooting one cannot take a Recording of a Screen on an Android Phone.

But then to surprise many of the people who wanted to take the screen recording video without a Rooted Phone, SCR Screen Recorder will now work without Root Access on Android Lollipop and above Android versions. Yes, Surprised? Even, I was but one big problem is to record our screens without Rooting Permissions using SCR Screen Recorder you will need a Device with Android Lollipop and Above versions, Because it won’t work without rooting on Android 4.12 JellyBean, Android 4.3 JellyBean and Android 4.4 KitKat as well.

On Previous versions of Android we needed access to the root, or get a system with ADB and Attach the phone to the system and get the Screen Recorded but the New Android Lollipop comes with the android.media.projection API which enables the External apps to record the screen of the Phone, so that the apps are enabled to record the screen without having access to root.

I wish the API would have been available for the below Android Versions so that Recording the Screen wouldn’t have been much tough, though it is not tough for a techie to root a phone and record the screen, but when it comes to normal people it becomes tough for them, as they can’t root their phones at an ease. Coming to the ADB method it is not the case that all the Android Phone users have a Computer system at their Place, and again the same techie problem, if they had a computer then also setting up ADB would have been a bit tough task for the non-techie people out here.

AAndroid News
Read More
In this tech-savvy world, we see a smartphone with high-end specs release every day, but we don’t find…
MMobile Apps
Read More
Table of Contents Some Awesome Casino Apps You Should to Try 1. Vegas Paradise2. SlotsWise3. Jackpot City4. Party…
MMobile Apps
Read More
The Apps have undoubtedly affected students’ lives. Today there are apps in the Play store solely made for…
AAndroid NewsGadgets
Read More
Tablets have been a great way to entertain ourselves with a Large-screen, Android Lollipop Upgrade has been one…