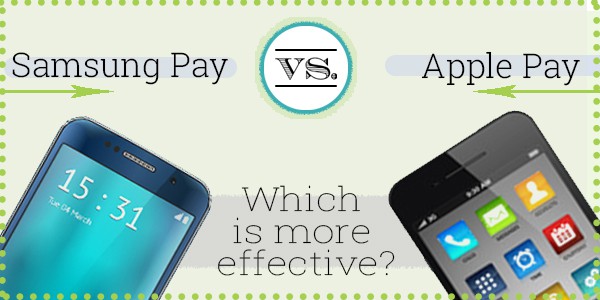 The Payment via Smartphones was actually introduced by Apple during the Apple iPhone Launch event which allows payment using the iPhone.

What is Samsung Pay?

Samsung Pay is a feature announced by Samsung which would allow payment through Samsung mobile phones easier and convenient, these days people use Mobile phones everywhere they go, and carrying wallets is what people don’t prefer while they go for a shopping.

So Apple introduced the Apple Pay, Google planned up with Google Plaso and finally Samsung announces the Samsung Pay which would allow people to make payments using their Samsung Smartphones.

Do you know what is Android Pay? Keep reading and know how it different from Samsung Pay vs Apple Pay.

The Apple Pay was a nice feature introduced, but it was a way limited, i.e it required that the terminal on which the transaction was to be done should have the NFC built in, which many of the Terminals at the places of shopping didn’t have.

Samsung Pay replaces the idea, by allowing payment to any terminator which has a Standard magnetic credit card reader and it also supports payments through NFC.

Why is it better than Apple’s Apple Pay?

So many of the sellers/shops wouldn’t have to replace the existing terminal with a new one, because the Terminal they have is supported by Samsung Pay. Thus, Samsung Pay is better than Apple Pay.

GGadgetsSamsung
Read More
For those who have been wondering whether Samsung will be launching the Galaxy S10 during the Mobile World…
AAndroid NewsGadgets
Read More
Vivo today officially announced the Nex Dual Display Edition smartphone. This is the follow-up to their flagship phone…
GGadgets
Read More
Motorola’s return back to Indian smartphone market began with the Moto G 1st gen. The smartphone was a…
AAndroid News
Read More
Yesterday we posted about Android Lollipop update for LG G3 and It seems that LG is already working…