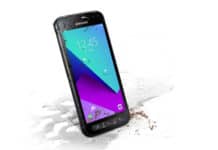 Samsung is among the biggest names when it comes to the world of smartphone technology. The company has been around for a really long time, and has brought forward numerous innovations in a way the markets function. The latest release from Samsung comes out in the form of Samsung Galaxy Xcover 4, a military-grade tough smartphone all set to come out for the markets of Europe in April.

The phone has been officially listed in Samsung’s Germany website, where all the specs have been listed out. Let us take a detailed look at this gen next Samsung smartphone.

Samsung’s latest device in the Xcover series of smartphones is known for its ruggedness and toughness. The phone is water and dust resistant, and is priced in at EUR 259. Samsung Galaxy Xcover 4 provides the users with military-grade MIL-STD 810G rating for toughness and ruggedness. The phone offers the users with protection against heat as well as cold. It is also protected against falls, vibration, humidity and salt. The Samsung Galaxy Xcover 4 is truly a masterclass in design.

The smartphone features an IP-68 rating. This means that it can survive immersion for up 30 minutes in up to 1 metre of water! The phone releases with three physical buttons – home, navigation and multi-tasking. Considering that this is a tough device that might be used in bad weather conditions, the Samsung Galaxy Xcover 4 features glove-touch support as well.

The Samsung Galaxy Xcover 4 runs on Android 7.0 Nougat OS, and comes with a 4.99 inch TFT screen. It runs on a 64-bit 1.4GHz quad-core Exynos 7570 processor. The phone also features 2GB of RAM, along with 16 GB of storage space, which is expandable. The Samsung Galaxy Xcover 4 features a 13 MP camera in the back and a 5MP camera in the front. The phone is powered by a 2800mAh battery.

HHow-to's
Read More
Table of Contents Topics covered:Why use ODIN or JOdin?What is JOdin – ODIN for Mac OSX and Ubuntu…
MMobile Apps
Read More
The Apps have undoubtedly affected students’ lives. Today there are apps in the Play store solely made for…
AAndroid News
Read More
Facebook has been one of the most commonly used social networking sites. Facebook mentions is another platform by…
AAndroid News
Read More
Table of Contents Remix OS Download for Your PCDownload Official Remix OS 3.0 [OFFICIAL LINKS]Main Features of Remix…