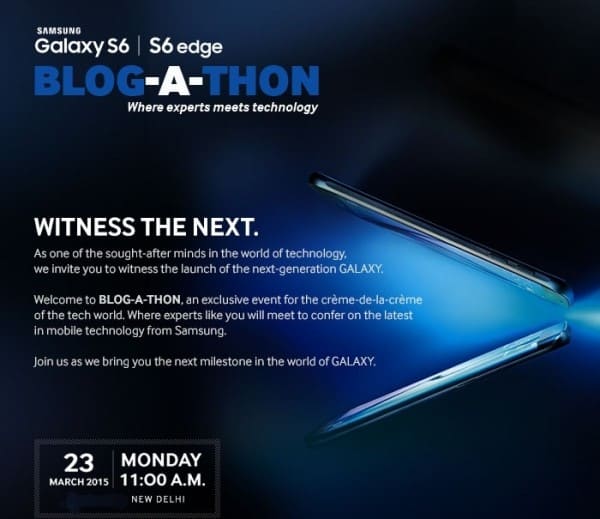 As the title suggests the Galaxy S6 and Galaxy S6 Edge would launch in the Indian market on March 23, Samsung has sent out invites for a press event that will be held in India’s capital : New Delhi on March 23. Samsung gives the launch event a name “Blog-A-Thon”, and is the invite shown above shows that the event will be held at New Delhi : 23rd March, 11.00 AM onward.

Samsung has packed both the phones with an awesome battery and announced that the USP of the battery  : “Fastest Charging Battery” which if charged for 10 minutes would have the capability to keep your Phone in a working state for 4 hours and it did shocked the people who were watching the MWC2015 event.

Coming to the display, both the S6 and the S6 edge have a 5.1-inch Quad HD Super Amoled Display with a PPI of 577, which is the highest PPI available in the Smartphone screens. So more details about the Pricing in India and other details about the S6 and the Galaxy S6 Edge would be known during the event, we will update you soon as we get more details, till then stay tuned!