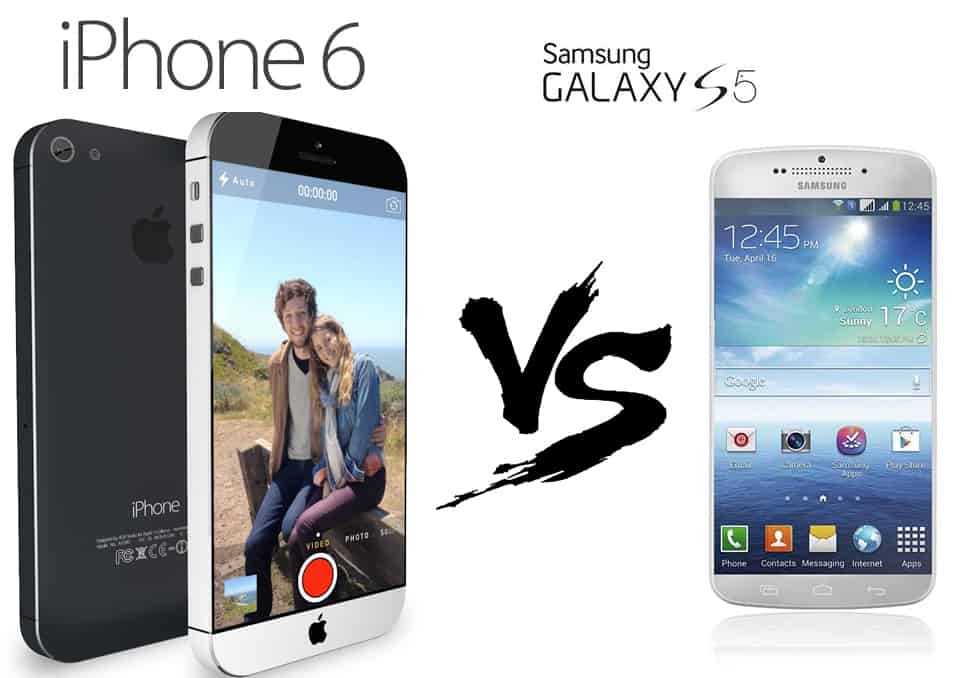 The comparison will be done on the basis of the following : Display, Dimensions, Processor, Memory, Camera, Operating System, Design, Battery Life, Connectivity, and Price. Lets see which one survives the Samsung Galaxy S5 or the Apple’s most advanced iPhone 6.

Apple has always preached that a phone is for single handed but they have now given up to the competition and made the iPhone 6 Bigger than 4 inches in size. The mere fact that they caved to others eating up the Phablet segment made them make not one, but two Phablets and thus abandoning their ideology has made us lose respect for them. While Samsung Galaxy S5 with its Super Amoled screen that is not as over saturated as its previous phones clearly wins even before we check specs.

iPhone 6 with its 4.7-inch LED-backlit IPS LCD sports a 750 x 1334 resolution. Here the  pixel density is 326 ppi and is protected by shatterproof glass and an olephobic(oil repelling) coating.

The Galaxy S5 with a 5.1-inch Super AMOLED display sports a  Full HD (1080 x 1920) resolution and a pixel density of 432 ppi. Protecting the display is a Corning Gorilla Glass 3 layer.

Winner : The Galaxy S5 with a higher pixel density despites its larger screen size clearly wins this round.

Apple’s change in ideology haunts it in this round too. With iphone 6 , the Cupertino-based company no longer has the bragging rights for “perfectly fits in the palm” phone.

Winner : The iphone 6  is slightly compact and  lighter than its rival, so it wins the Dimensions round.

Winner : Despite the S5 having double the cores and a significantly higher clock speed, benchmarks have shown that iPhone 6’s processor is indeed more powerful. The iphone with its sheer innovation wins this round.

Apps and HD games, your entire music collection, TV shows that you like to binge watch, photos and videos that you captured at full resolution,consider all these and you do require a large storage.

While talking about RAM, the Galaxy S5 arrives with 2 GB, while Apple’s iPhone 6 has only 1 GB. Anyway, iOS’ multitasking doesn’t require a high amount of RAM, so both devices will provide a decent multitasking experience.But critics while praising the iphone 6 powerful processor have interpreted that the 1GB of ram might not be enough for the processor.

Winner : Here the Galaxy S5 with maximum of 160 GB of storage(internal+sd card). Samsung’s smartphone wins the Memory round.

Even though when it comes to taking photos not all are capable of fully utilizing the phone cameras , a nice camera on the back of the smartphones is always welcome. Let’s look at the camera units of the Galaxy S5 and iPhone 6.

Android and iOS started as operating systems and now they are belief systems, one could even say religions. With Android and iOS “taking inspiration” from each other, now we have 2 very Mature mobile platforms.

The latest iPhone 6 has the latest operating system i.e iOS 8,while iOS 8 continues to enhance the design philosophy introduced last year by iOS 7, of ditching  skeuomorphism for a flatter UI. With the new operating sytem we also have new features, Fortunately/Unfortunately, there’s nothing too big. iOS 8 introduces an enhanced messaging app that now allows  to send voice messages and share their location. There’s  a new Health app, smarter keyboard (ios now allows installing third party keyboards), and a revamped Gallery app. The new notification banners, work exactly like Android’s widgets, but held in the Notification Center.

The Samsung Galaxy S5 at its core has  Android 4.4.2 KitKat , with a layer of Samsung’s proprietary TouchWiz UI on the top. KitKat may become a year old very soon, but it still is the latest operating system from Google. Anyways, Samsung being Samsung did customize Android Kitkat to a great extent. Galaxy S5 does bring all the TouchWiz-specific features it has devised  in the past, including touchless controls, Multi-window and some more Features. The most useful of the customization is the Ultra Power Saving Mode that shuts down unnecessary apps, turns the display black and white and thus dramatically improves battery life. Galaxy S5 also introduced to the world the Download Booster which combines WiFi and LTE to increase the download speeds, Private Mode (which gives you the full control of which apps to be available when, let’s say lend your phone to a friend), .

Yes, iOS may have  been more consistent than Android in the past,but with the latest updates that were pushed but rolled back due to the glitches users were facing has raised some serious trust issues. On the other hand Android KitKat  is more customization by nature giving the user freedom to do whatever he thinks suits him better.

Winner : Samsung Galaxy S5 because of Android’s flexibility and Samsung’s features it beats the iOS 8 (iPhone 6) too.

Samsung did receive a lot of negative feedback for not using Premium material to build its devices  in the past. But things have changed since the Samsung Galaxy S4.

The Samsung Galaxy S5 retains form factor and the looks of its predecessor, but has less rounded corners and sharper edges. The back is  of  rubberized plastic that  offers good grip. On the back, there is a heart rate monitor underneath the camera sensor, the speaker is in the bottom left corner. The Samsung S5 is also equipped with a fingerprint sensor integrated on the Home button. The phone is IP67 certified which translates that it is dust proof and is water resistant up to 1 meter and 30 minutes. It might not be the best-looking in the market, but it’s definitely an improvement considering the past. It’s available in four body colors: Black, Blue, White, and Gold.

The iPhone 6 is not a scaled up version of the previous year iPhone, it doesn’t even look like any of them . The  smartphone has more rounded corners and is made of aluminium. It in fact is very slim, but the  large bezel around the screen leaves it not so charming as the other iPhones when they were launched.and then there’s the camera bump.And now with the bendgate phenomenon,all the design improvements and materials look like a iPhone 6’s curse there are three color options available, Gray, White, and Gold.

Winner : The iPhone 6 indeed is a wonderfully-crafted smartphone and, no doubt, one of the best-looking on the market,but at present the s5 seems more practical a design.

Every smartphone maker is doing one thing or another to increase battery life on its devices. The first signs of success are visible here . Hopefully with advances in the battery technology and smarter operating systems we will have phones that would last till we need them to.

The iPhone 6 is feuled by a non-removable Lithium-Polymer 1,810 mAh battery. Apple promises 250 hours of stand-by time and 14 hours of talk time. While in our  the iPhone 6 was up and running for about 18 hours of moderate usage on a single charge.

The Galaxy S5 has a removable Li-Ion 2,800 mAh battery, which, according to Samsung,it gets  390 hours of stand-by time or 21 hours of talk time. When we got our hands on the Galaxy S5, the smartphone managed to stay awake for almost one day and a half of moderate usage.

Winner : The Galaxy S5 has much more better battery life than iPhone 6, so it wins this round.

Winner : The connectivity round goes to the Galaxy S5.

Let me say that the cheaper smartphone wins the point.

The Samsung Galaxy S5 might look old and clunky but comparison of the phones along with the real life events have proven that the S5 is better than the iPhone 6. I would prefer to have a Samsung Galaxy S5 because of many reasons, One is the Android OS itself. Secondly, the presence of Custom ROMs, Availability of many Free Apps.

Overall : Samsung Galaxy S5 wins the Game! Did we some? Comment the thing we’ve missed, We’ll try updating it!