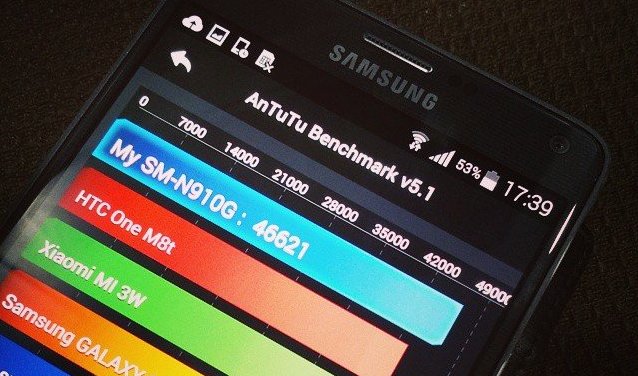 Below is the Image showing : Samsung Galaxy Note 4 Antutu Benchmark

The Samsung Galaxy Note 4 Antutu Benchmark at 46621 did not surprise us at all. Its 2.7 GHz QuadCore SnapDragon 805 processor with 3 GB RAM and a Adreno 420 GPU which makes the Phone in scoring the whooping 46K+ Antutu Benchmark score. The High Processing Power with a Good amount of Temporary storage is necessary for powering the Multi-window, Split-window and Popup windows features on a Quad HD 5.7 inch screen Samsung Galaxy Note 4.

The Samsung Galaxy Note 4 would come with the default TouchWiz UI and is suited for the people who require large sized phone with lot of processing power and a great multi-tasker. To remind you the price of the Samsung Galaxy Note 4 is 58,300 INR only which is very less when compared to Apple iPhone 6, iPhone 6 Plus because of the features which are encompassed in the Phone. For more updates stay tuned.