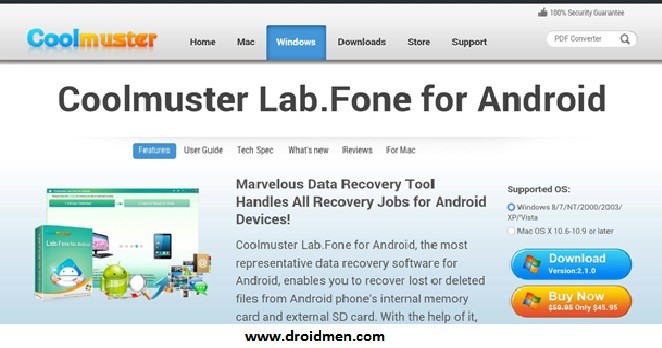 How to Recover Lost Data from Samsung Phones?

Today, we are living in a world where everyone in the world has a smartphone! Smartphones have literally taken over the world. After all, there are numerous advantages of using them. Be it creating documents, streaming music or videos, smartphones can do it all. However, this excess usage also brings some problems. One of the biggest problem tech-savvy users face is Losing Data of their smartphone.

Well, talking about my personal view, even the thought itself of losing all my phone’s data give me shivers! Losing data is one common problem users face so today we will talk about recovering lost data from phones or I should rather say Recover data from Samsung Internal memory.

How to recover data from Samsung phone?

One of the best ways to recover data from Samsung phones is Coolmuster Lab.Fone for Android. It’s one of the best data recovery software for android I have ever came across. It gets the job done so easily that even a starter can do it. After installing and opening the problem, you can recover your data step-by-step easily. It can recover your lost photos, videos, contacts and text messages.

We’ve all been in the situation where we have accidentally deleted important images from android phone.  If you are specifically looking to get your deleted pictures back we suggest trying out Starzsoft photo recovery.  It’s free and they say they can recover them no matter how you lost them.

Using Coolmuster Lab.Fone for Android is super easy. Just connect your device to your computer and open Lab.Fone. After that, just scan your phone for deleted files and then from the list of files gathered, select the files you want to recover and start the process of recovering and you are done!

Lab.Fone for Android by Coolmuster is an awesome software which you can use to recover files from your smartphone by the easiest way. The program is worth trying and everyone looking out to recover their lost data should get their hands on it.