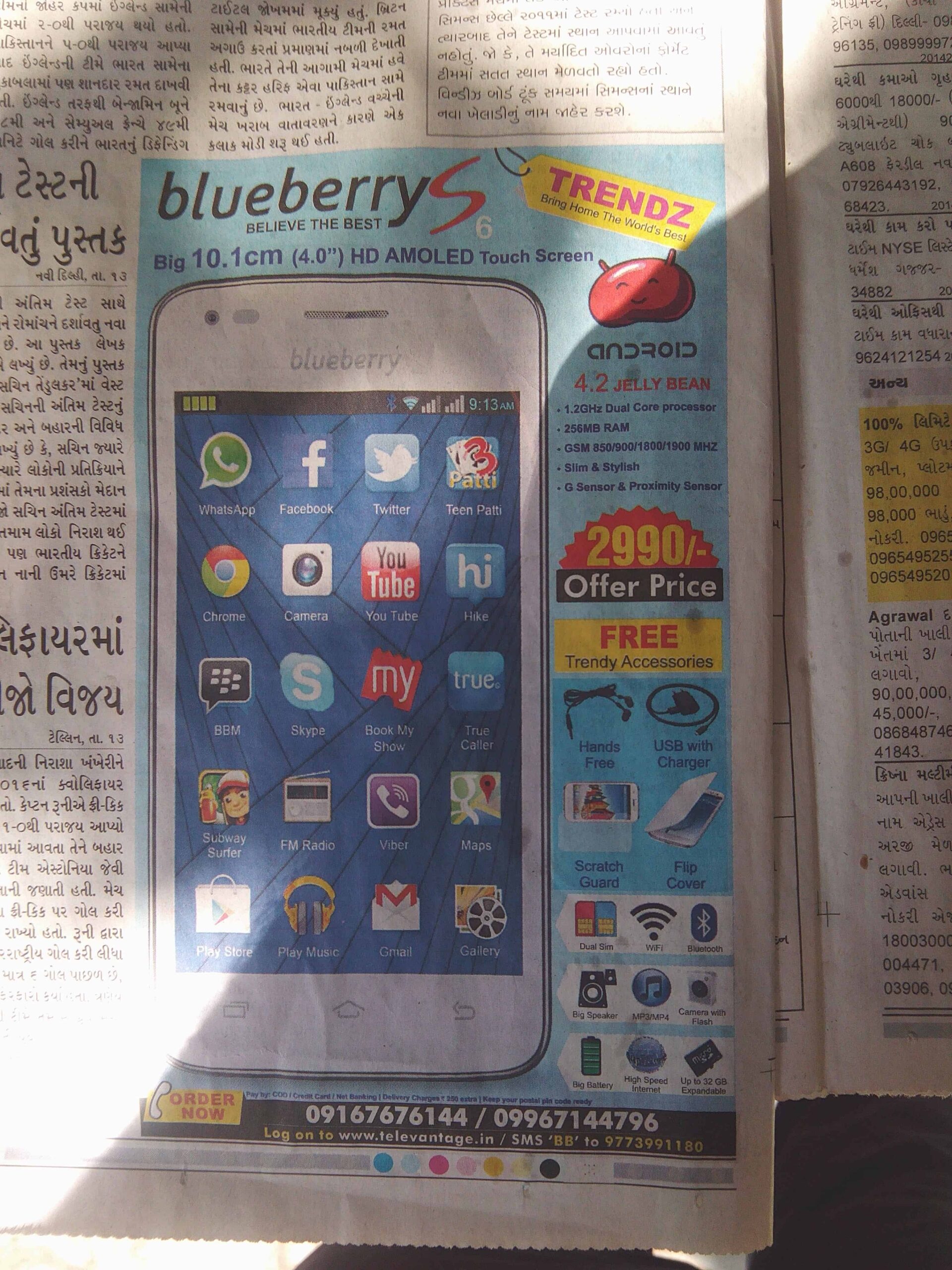 Reasons for Failure of Android One Phones in India

Here we point out some reasons for Android One failure. These are deductions based on market research and logic. One may not agree with us and we are completely fine with that.

Reason number One : The  Competition and the tricks they are using.

The Android One devices are a great deal, the reviews have shown that they are good at almost all tasks one could think of doing, and are very competitively priced.

The devices are targeted towards any Indian who can benefit from a smartphone but cannot buy it due to the high price of the standard devices. Many from this target group do read a newspaper on a daily basis, at least at local teas hops or paan shops. Here is an ad that we found in a Gujarati Newspaper .

The phone is sold by a company called Televantage, and the ad is full of lies, the ad says it has an HD AMOLED screen, but their own website says it has an HVGA (480 x 320) screen. The ad shows the device’s screen with many apps, even if we consider that the user installs half of the apps shown here, the phone would come to a grinding halt (think about multitasking)

We know it because we have a 256 MB RAM phone, which was bought 18 months ago and it was barely usable and we had to upgrade to a better phone just 6 months later. Even if one argues that these devices are value for money, he has to admit that this is just pushing outdated OS on very low spec hardware and did I mention that it has a short 6 month warranty and in the fine print you can read that delivery charges are Rs 250 extra.

We did this research because We are tech enthusiast and we had the resources(Internet, PC and a mobile to take the photo) but a rural guy may not be able to do that.

This doesn’t stop at just print media, tvshopping is in this shady business too.

Apparently they have been having an “Exclusive Launch offer” since the last 3 months ( I clicked this photo today and  they are just running this 3 month old video everyday on tv).

We found it available on snapdeal for around  Rs 2797 at 2797 INR the phone actually is value for money, but one should not expect any miracles from it. The video shows the clap to locate feature in the swipe phone but we can safely bet that it would chew a huge chunk of battery if the feature is kept on.

These phones are available to the rural people if they call flipkart/amazon/snapdeal. But these marketplaces are not very enthusiastic to sell them. For example we called Flipkart’s product expert at 1800 1080 1800 and asked him to suggest a good phone under 7000 rs.

The Spice Dream Uno, one of the android one devices falls under this price range. The expert suggested us a Moto E, then he suggested hauwei honor holly,then suggested us Micromax unite 2 106. At this point we lost patience and inquired what Android One is, then he did not explain me the concept of Android one just blurted out the hardware specs.

Then we asked his verdict and he said to go with Moto E, we then spoon fed him the Moto E disadvantages of Moto E i.e. lacking a secondary cam, lacking a autofocus function in primary camera and then I hung up the call. So basically Android one is not at all pushed by the exclusive seller Flipkart because Motorola has had a constant tie up with them and Hauwei is a new one.

That’s how businesses work the new guy comes in to replace the old guy.Kudos to Motorola marketing the Moto E retailed at around 5500 at ‘The Big Billion day’ and it was bang for the buck at that price.

The Urban India is bombarded with great phones from Asus, Xiaomi, Motorola, Huawei etc. The devices that go out of stock in minutes and seconds are not unknown. These devices provide better value for money than Money hardware wise and do have service centers in Tier 1 cities and the offline budget market consists of thousands of shops that give great discounts and services. Flipkart has same day delivery where as in these stores you could buy a phone at as fast as 10-15 minutes. The second hand market is a great thing in metros where one could get great used phones at affordable prices. So there is actually no point in buying an Android one if you ignore the software updates.

Reason 2 : The update may not be welcomed by all.

Nobody likes a change, they like improvements but not the change. Tech savvy people like UI overhauls, normal users don’t. The Lollipop update pushes the very needed power saving features of project Volta, but along with it the material design. That’s a UI change and people don’t like changes. For a person aged above 35 years, it is hard to learn a new UI. The only reason Windows XP still lives on is the UI, but in Android the reason for 2.2 still living around is the low cost devices on which it is loaded.

You can do a social experiment give this offer to a person who has a motorbike (we did and got a NO for an answer),

“I can increase your bike mileage, but in return I will repaint your bike and will change some controls. Will you let me?”.

This is exactly what’s  happening here, an Android One owner will get the benefit of increased battery life if and only if he upgrades,and if he upgrades he loses the known look and feel of his Android 4.4.4 UI . According to me the power saving features should have been enough for Lollipop. The Material design would have been better for India in the next update, that’s just our prediction and we actually hope we am wrong this time. PocketNow flashed a preview release of Lollipop on nexus 5 and it looks from the video, that the lollipop learning curve is a little too steep.