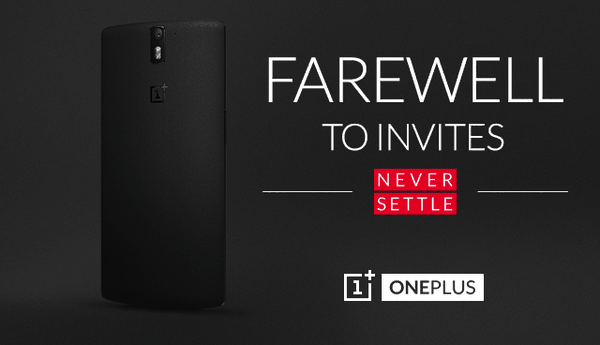 OnePlus Two Effect : The OnePlus One will be available without Invite.

If you’ve been thinking of a device within the budget segment between Rs. 20000 and Rs. 25000 then you might have heard about the OnePlus One. The OnePlus One came with Pre-installed Cyanogen OS which made it an unique hit in the Smartphone market. But it’s not just the OS which was unique, but the invite-based system of buying the OnePlus One was also unique.

Though the unique strategy of selling the OnePlus One was not liked by many people who wanted to buy the Phone, but it was not possible to buy the device without invites.[pullquote]Win a OnePlus One, Join the OnePlus One Giveaway[/pullquote] The OnePlus One at initial stages faced some issues, but the later updates solved all the bugs which came with the Phone.

The company OnePlus is well known for keeping secrets a lot of assumptions were made regarding the today’s announcement. Today the company announced the “OnePlus One will be available invite free” and in addition to it, the company said

“With the experiences we’ve gained with the One, we will be far more prepared to make the same transition with the OnePlus 2. Yes, the 2 will initially launch with invites. We’re committed to maintaining razor-thin margins in order to give as much value as possible back to our users, and this drastically increases our risk. The OnePlus 2 will bring the challenges that come along with a brand new product, and initially, our invite system will help us to manage that risk. It also helps us to be sure that every OnePlus 2 user gets the amazing experience that they deserve.”

The company made no clarification regarding the launch date and the pricing strategy of the OnePlus Two, but it mentioned that the company will keep Razor thin margins.  There were rumors regarding a less-priced phone to be announced, but OnePlus made no announcement regarding it. So didn’t have an invite to purchase an OnePlus One? isn’t it a good news? What are you waiting for?