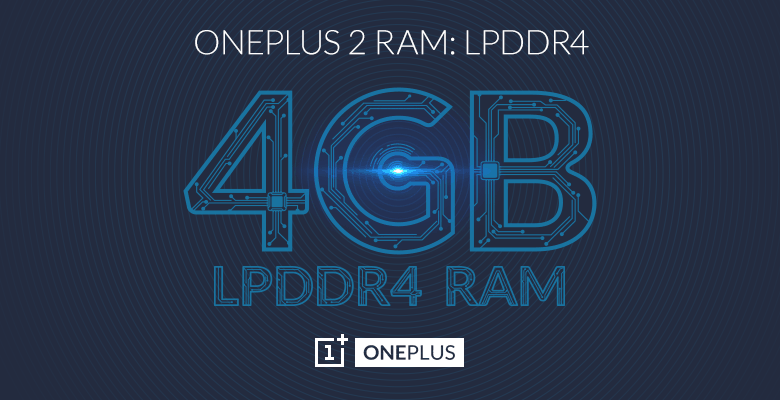 It’s not just about the amount of RAM it has given, but the RAM placed inside the OnePlus Two is the latest and the greatest in the market. According to the company, the LPDDR4 would not only provide a great performance, but it also would consume less power. Less power consumption by the RAM would lead to “Less usage of battery” which would result in long lasting of the battery.

Having something more than the limit is not a good idea always, the same is with RAM, The Android OS uses RAM to store the recently used processes and releases the used space when required. 4 GB of RAM is huge, Hardly there are chances that the smartphone may use more than 3 GB RAM. To counter that situation

OnePlus says, “Oh, by the way…did we mention we are packing in a whopping 4GB of LPDDR4 RAM? That’s more than, well, anyone else. Unlike 32-bit processors that can only utilize up to 3GB of RAM, our 64-bit Snapdragon 810 processor uses all 4GB to its maximum potential.”

At Droidmen we think, because the RAM will consume less power and the CPU will have enough RAM to process the tasks, there are very less chances that the OnePlus Two will get heated, However, we are not sure in what way it would turn out to be, because it’s not just the configuration which might decide the performance of the phone, but it is the good hardware and software combination which makes the device perfect. Both rely on each other, and failure of one to interact with other could cause issues!