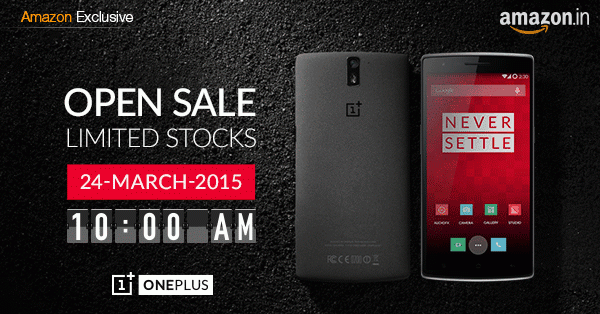 OnePlus One smartphone was launched long back in this tech savvy world, yes, a long back, the technologies and launches have been increasing at such a fast rate that we are calling a phone which was launched just few months back as a phone launched a long back. OnePlus One Smartphone’s Indian version is available based on an Invite-system, People who need to buy the Smartphone are required to get an invite to buy the Phone.

Even after passage of time, people are still interested in the OnePlus One and many of them are still looking for an invite, in case you are someone who was looking for an invite and wasn’t able to get one, then the time has come that you get ready because Oneplus is hosting a open sale on Amazon India on 25th March, 2015. Yes, an open sale!

Open sale? Whoa! I’ll surely get a OnePlus One!

OnePlus has already notified many people about the open sale that would be held on Amazon India on March 24th, 2015 10.00 AM onward, However, not many open their Mail box daily and some may miss the news, Why don’t you remind them? Just click any of the network button below and inform your friends about the open sale which might be held 4 days after today!