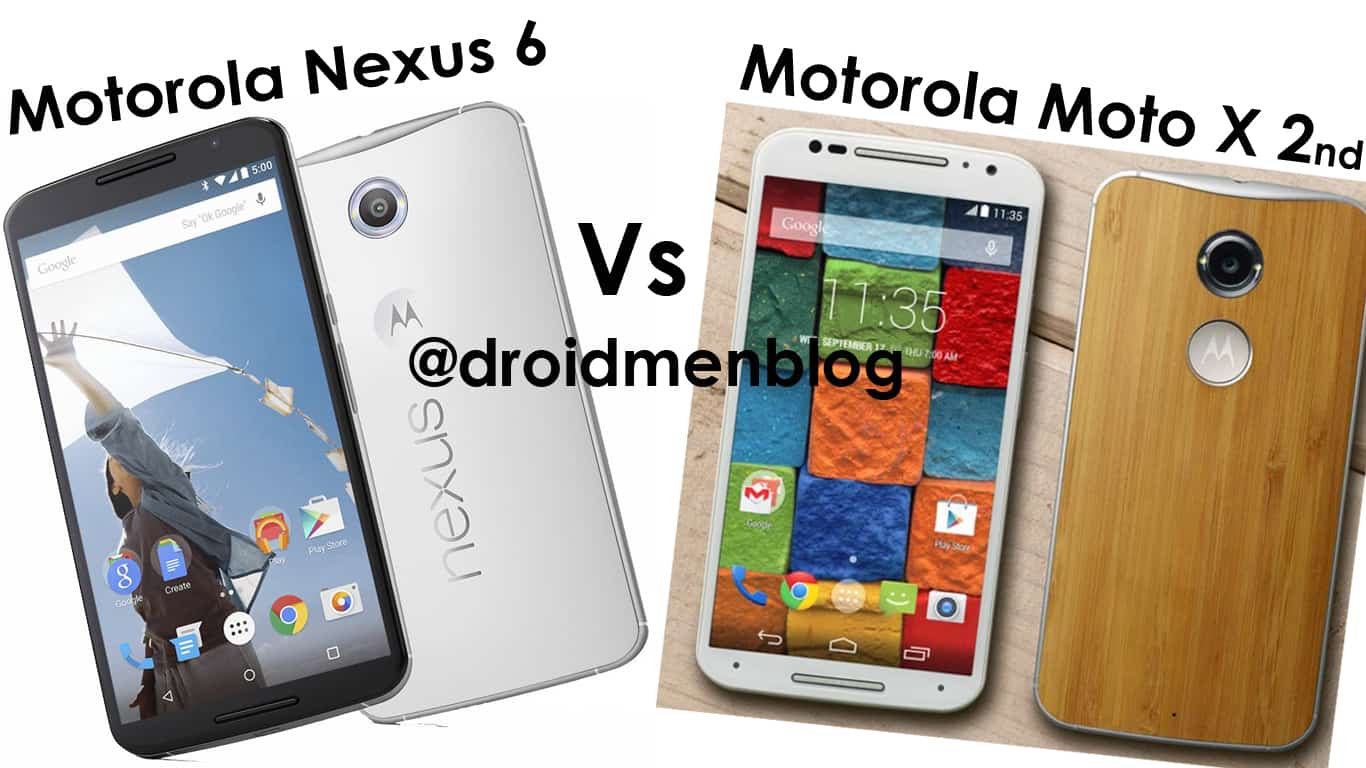 On October 15th Google announced the Nexus 6 and with its Large 6 inch screen it looks like a blown up Moto X 2nd Gen. After comparing the Nexus 6 with Nexus 5, now it’s time for the Moto X Second Gen and Google Nexus 6 comparison so in this post I will be comparing the Nexus 6 and Moto X Second Gen, I would compare both of them completely, though I might not include the very minute details but the Comparison would surely guide the buyer to buy the best for him. So let’s begin with the : Nexus 6 vs Moto X 2nd Gen Comparison.

Winner : Google Nexus 6 because, it has a High-resolution display with a high ppi too. But some people who prefer a Moderate Size won’t agree with Google Nexus 6 as the winner because of the large screen it has.

Winner : No Doubt, the winner is Moto X Second Gen

The Nexus 6 will be available for pre-order in late October, 2014 there will be two variants of 32 and 64 GB with prices starting from $649 (off contract). The Nexus 6 Smartphone will be sold by Google as well as Motorola. Google has announced that carriers such as Verizon, Sprint will soon offer the Nexus 6 with a two-year contract. Whereas the Moto X 2nd Gen already has the two-year contract options and thus costs $99(with contract) or off contract $499.99 (16 GB) or  $549.99 (32GB)

Winner : For now, Moto X is the clear winner here.

The Moto X isn’t too far behind, It already runs on the latest  version of Android 4.4.4 KitKat along with the basic Android Features it also packs with the voice-activated personal assistant, Moto Voice now which can perform sorcery such as launching selected apps, toggling sleep mode by saying “Good morning”,  and the ability to change the spoken phrase used to open the assistant. The Moto x’s infrared sensors that are located on the front panel can be used for motion-activated gestures, such as invoking Moto Display for checking notifications when the phone is sleeping, and for dismissing alarms and incoming calls. The camera too has some tricks up it’s sleeve with voice activated shutter, best shot etc.

Winner : For a user who wants all the functions direct on Hand : Moto X Second Gen is the winner and for the one’s who prefer using Stock OS and don’t want much functionality on hands can take the Google Nexus 6 as the winner.

The Nexus 6 has a 3220 mAh Battery that is supposed to provide you 24 hours of use from a full charge. It supports Qi wireless charging and can be quickly charged fully using a Turbo Charger.

The Moto X has a 2300 mAh battery that is supposed to provide you 24 hours of use. Like Google Nexus 6 it also can be Quickly charged with a Turbo Charger.

Winner : Google Nexus 6 as it has a better Battery and may provide a backup as it has the Stock Android 5.0 Lollipop.

The Nexus 6 is an upgrade to the Moto X camera as it adds an Optical image stabilizer to smoothen out any jerks jumps while recording videos,and will enhance HDR and lowlight performance.

Winner : Nexus 6, as it has Optical Image Stabilizer in addition to Moto X Second Gen

Winner : Nexus 6, as it has an edge with the better processing power but with the Infrared motion sensors that bring the motion gestures of the Moto X to life,we call it a tie.

With the Nexus 6 soon to be launched with carriers with 2 year contracts, the only thing that could steer a buyer away is it’s size. The Nexus 6 dominates the Moto X in every way possible manner. I would only go for the Moto X Second Gen, incase I don’t like Large screens? Who doesn’t likes large screens? It is people who don’t like carrying Large screen in their pockets but love watching stuff on Large screen so Nexus 6 FTW.

Don’t Agree with me? Don’t worry, Comment your Argument below and I’ll surely try to add up if something more argumentative is found.