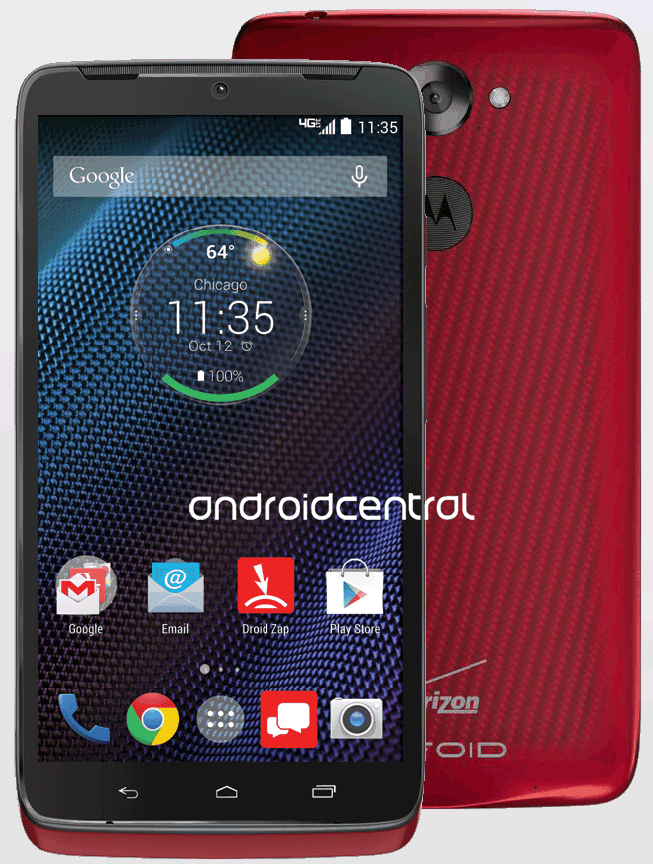 Motorola Droid Turbo is set to be released in the United States exclusively on Verizon Wireless, had almost all of its details leaked recently. Now an anonymous source has sent some official marketing material for the Motorola Droid Turbo to Android central and this leak confirms and adds more details to the previous leaks about this phone.

According to the leak, Motorola Droid Turbo has a 5.2-inch Quad-HD display with Coring Gorilla Glass 3, Qualcomm Snapdragon 805 quad-core processor, 3GB of RAM and appears to be running Android 4.4.4 KitKat although no operating system information is particularly mentioned, the Droid Turbo will also have a 21MP rear camera with dual-LED flash, 3900 mAh battery for two-day usage, and splash-resistance towards everyday spills and 20 minutes in a downpour.

The Droid Turbo will also include a Turbo charger in the box and the charger has shown its fast charging capabilities in the new Moto X. So with these features and specs the Motorala Droid Turbo is one of the best devices that have ever hit Verizon.

There is also a kevlar reinforced back cover that supports wireless charging. The phone also comes with 4G LTE/XLTE and Verizon’s new VoLTE (Voice over LTE) too is supposed to be enabled for the Motorola Droid Turbo in the next months.

The Droid will also come pre-loaded with the Droid-specific “Zap” features like Zap Zone, Zap with voice, and Zap to TV. The Zap features enhance the Motorola Droid Turbo users experience with group media sharing and chromecasting along with many other features.

Verizon’s site Droiddoes.com is now up and currently redirecting to a Verizon  page with countdown timer showing october 28th as the release date and below which there is a option to subscribe to the launch news via email updates.