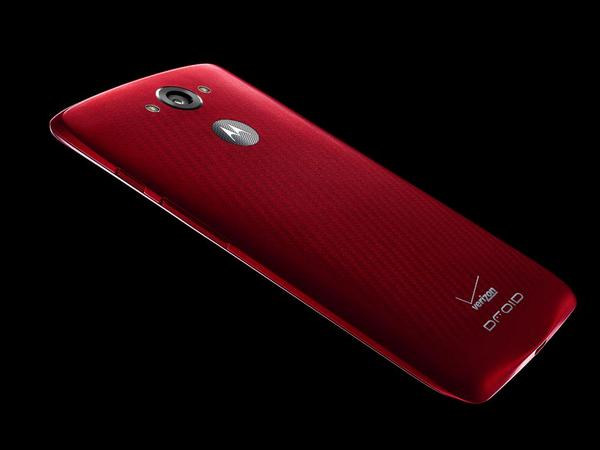 Verizon wireless the US telcom which uses a twitter account “Droid landing” for promoting the launch of it’s motorola Android lineup. The twitter account accidentally tweeted and then quickly deleted an image that reveals How a Red Motorola Droid Turbo (Verizon’s next droid) will look like the below Image.

This is the most anybody has ever seen of the new droid till now. We don’t know if this was actually accidental. but one thing is sure : This is the best looking Droid we have seen. Motorola Droid Turbo is about to launched exclusively to Verizon wireless and looking at how cheap the 2nd gen moto x is priced, the Droid Turbo too wouldn’t burn a hole in your pocket.

And this leak confirms Hellomotohk’s leak of images of  motorola droid turbo phone covers, and going by that assumption the specs from a recent benchmark leak may be true.

A 5.2 inch QHD (2560 x 1440) display, a Qualcomm Snapdragon 805 quad-core processor, 3GB RAM, a 21MP rear camera with dual LED flash and a 2MP front cam, 4G LTE and a HUGE(specs unknown) battery that can quickly replenished with fast charging mode. We too can’t wait to find more about this beast and will keep you updated so stay tuned.

AAndroid News
Read More
When Google has already made the Android Marshmallow based firmware available for the Nexus devices, the other smartphone manufacturers…
AAndroid NewsReviews
Read More
Bored of the existing Looks of your Android Smartphone ? Don’t worry Themer is an Android App which…
AAndroid NewsHow-to'sMobile Apps