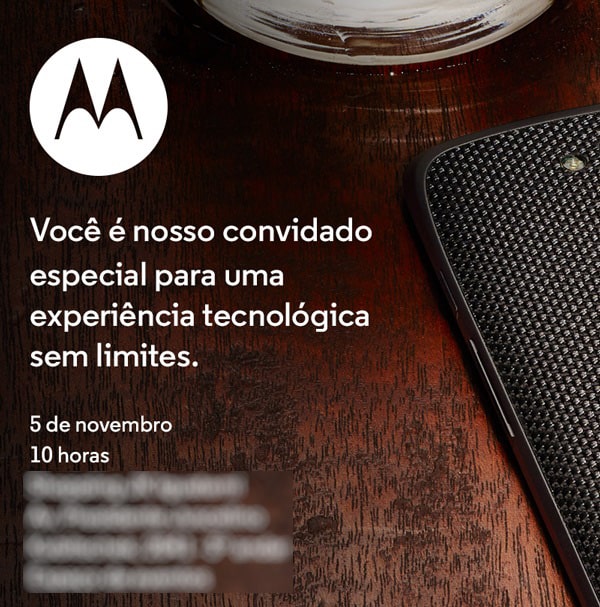 Moto Maxx AKA Droid Turbo to Launch Globally on Nov 5.

“Our space and you invited to a technological experiment without limits on November 5, 10 o’clock “

This is the Google translation of the text of the above image. The above is an image of an invitation by Motorola to the Brazilian tech press (Brazil is a crucial territory for Motorola) for the launch of Moto Maxx, the global version of Verizon Droid Turbo.

The Droid Turbo (and hopefully the Moto Maxx) has a 5.2 inch Quad-HD Display of Screen resolution 2560 × 1440 and has 565 ppi AMOLED display with a front facing speaker with a long lasting 3900 mAh battery that is claimed to last 48 hours with mixed usage.

Operating on Android KitKat 4.4.4 the Droid Turbo AKA Moto Maxx is powered by a 2.7GHz quad-core Qualcomm Snapdragon 805 processor supported by 3GB of RAM  and would come in different memory variants i.e 32/64GB of internal storage.

The feature list continues with a 21MP f/2.0 rear camera with dual LED flash, that can record 4K videos at 24fp sand 720p slow motion videos, 2MP front camera with 1080p video recording, LTE support and Turbo charging that fills up the battery for 8 hours of usage in just 15 minutes.

Back in the month of july Motorola has applied for a trademark on the term “Moto Maxx” which makes the possibility of Moto Maxx coming soon in the market, and since the invite image has the Droid Turbo used in it, the Global version of Droid Turbo could be the Moto Maxx. Stay tuned to Droidmen for more Android News