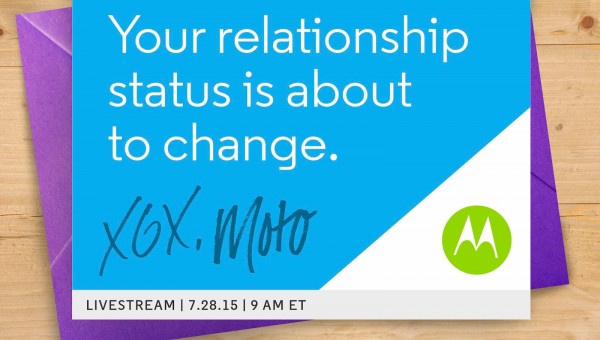 Moto G 3rd Gen, Moto X 2015 and One Another Device to be Launched by Motorola Soon.

Motorola’s return in the Indian smartphone market has brought it to a good position in the market. Moto G’s launch was a hit, followed by Moto X and the Moto E. The company follow’s the strategy of launching the phones with same name but upgrade the specs and launch the newer versions in the form of generations.

Recently there has been a lot of buzz about the Moto G 3rd Gen, The company has officially sent press invites of the event which is to take place on 28th of July. The event invite doesn’t tell anything about the devices the company is planning to come up with, but on the bottom left corner of the invite “XGX Moto” can be seen which suggests that with Moto G 2015, the company is also up with plans for the Moto X 2015.

The ‘XGX’ suggests that Moto X 3rd Gen and Moto G 3rd Gen could be the phones which will be launched, but there is one extra “X” which suggests that the company could come with one another gadget, It could be a different variant of the Moto X 2015, but we can’t conclude about it without any official announcements.

The Moto G 3rd Gen AKA Moto G 2015 has been in buzz since many days, the Antutu score of the phone has already shocked many people with a whooping score more than 80,000. However, the Moto G 3rd gen will look similar to its predecessor with some changes. The Moto G 2015 would come with Quad-core Qualcomm Snapdragon 410 64 bit-processor. The Phone would come in two different storage variants, the 8 GB variant will comes with 1 GB RAM like its predecessor, However, the 16 GB variant as reported by AndroidGS would come with 2 GB RAM.

Coming to the Moto X 2015, There is not much known about the Moto X 2015, but since the “X” on the press invite suggests, there are chances that motorola may launch the Moto X 3rd Gen. The Moto X global version will come with a 5.2-inch Quad HD display with a screen resolution of 1440 x 2560 pixels.

The Moto X 3rd gen will be accompanied by the Qualcomm Snapdragon 808 hexa-core SoC. 4 GB RAM will be encompassed to keep the high-end chipset work smooth. The Phone might come with 64 GB Internal storage and might also support an External SD card.

AAndroid News
Read More
After the successfully launching of one of the best wearables in 2015, Huawei’s latest editions are designed for…
GGadgets
Read More
Sony’s latest flagship the Sony Xperia Z3 compact, is now available for pre-order on sony’s US online store…
GGadgets

Read More
Table of Contents What is Juul?Trends Revolutionizing the Industry1. Public Health Debates2. Online Sales3. Vaping and CBD: A…
AAndroid NewsGadgets
Read More
When Xiaomi is going to launch the Redmi Note 2 Pro and targeting the mid-ranged market, Huawei is…