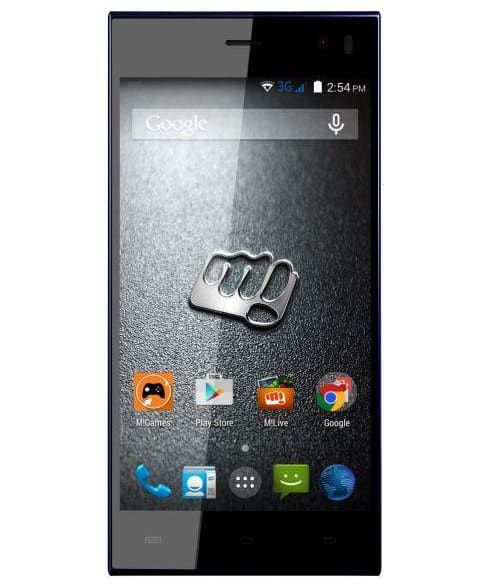 Micromax is India’s second largest smartphone manufacturer, the company announced its new Smartphone named Canvas Express yesterday. It seems Micromax is working really hard as it unveiled the new range of devices – “Yu Phones” and has partnered with Cyanogen for providing a Smooth Android Experience to the user. I’ll talk about the Yu Brand Phones in the upcoming posts. Ready? So Let’s begin with the Specs of the Canvas Xpress Smartphone.

How will the video look when I watch it in my Phone? Will it look clean? Will it retain the quality when I watch it from different angles? What will be the size of the display? Well this is what the Display is about. The Canvas Express would encompass a 4.5-inch FWVGA display of screen resolution 480 x 854 pixels. The Pixel density and the other display features such as Display protection is not known yet, but would be known soon.

Will my phone be able to play High-end games? Will it be able to do calculations fast? Will it able to open apps Faster? Well Processor is one of the components which would be responsible for the above questions. The Canvas Express would encompass a 1.3 GHz Quad-core processor. Well the chipset and the processor used is not known yet, but it would have a Qualcomm chipset.

RAM refers to Random Access Memory, the Canvas Express would come with 1 GB of RAM which would be responsible for all the tasks that would take place on your Phone. The 1.3 GHz Quad-core processor to move swiftly would require a Good Quality RAM to do Fast Multi-tasking on this Phone. Though 1 GB RAM is not less, but these days the trend of 1 GB no more remains, but seeing the price one can easily say that it has a Good Processor and RAM combination.

The camera is the Canvas Xpress is not much impressive but when compared to the budget one can say that the camera quality is a bit okay okay. The Canvas Xpress comes with a 5 MP Rear camera which is followed by a 0.3 MP Front-Facing camera. This is where Micromax has compromised a lot to make the Phone available in that range, the Canvas Express would have been more impressive with a 8 MP Rear and 2 MP Front-Facing Camera.

The Canvas Xpress is priced at only 6999 INR, Yes! With all so good configurations it comes with a Small budget, the only place where this Phone could get beated is the Camera Quality, because the 5 MP camera is no more a good quality for people these days and a 0.3 MP camera would suck in from of the Redmi 1s which costs less than the Canvas Xpress.
The Canvas Xpress would be exclusively available on Flipkart – December 8th on wards.

Read More
Leaks in the world of smartphone technology are quite common. There have been a number of occasions where…
AAndroid News
Read More
Xiaomi, the Apple of China has launched it’s next flagship in the form of Xiaomi Mi4C. It has…
GGadgets
Read More
OnePlus One Smartphone has been one of the best Smartphones from the first day it entered the market,…