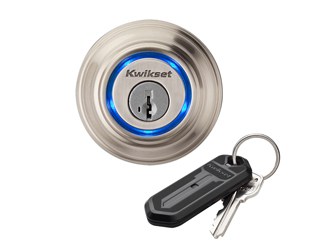 Ever feared of losing your home key while your traveling somewhere? Whenever I go for an outing or go outside my home, the Lock keys always give me a feel of insecurity. As an Android Freak, I once said my Friends : let’s make an app which allows people to unlock the Doors using their Smartphones but since we lack knowledge and techniques used to develop such stuff, the Ideas gets dropped but we know, A Good Idea Never Dies.

The KwikSet Kevo Android App was under a Beta stage and didn’t work with all the functionality’s listed in it, and now it is official and is available at our own Google Play Store. The Kwikset Kevo allows people to unlock the doors by touching the lock. People with compatible devices can use Kwikset Kevo and Roam tension free.

I tried installing Kwikset Kevo Android App in my Samsung Galaxy S3 and a Friend’s Galaxy Note 3, The try went as a fail as the App is not compatible with any of the Devices I own. On doing research work, it was found that the Kwikset can be installed in the “Nexus 6”, “Nexus 9” and Samsung’s Galaxy S5 and it requires Android Lollipop 5.0.1 and above android versions to work at it’s best.