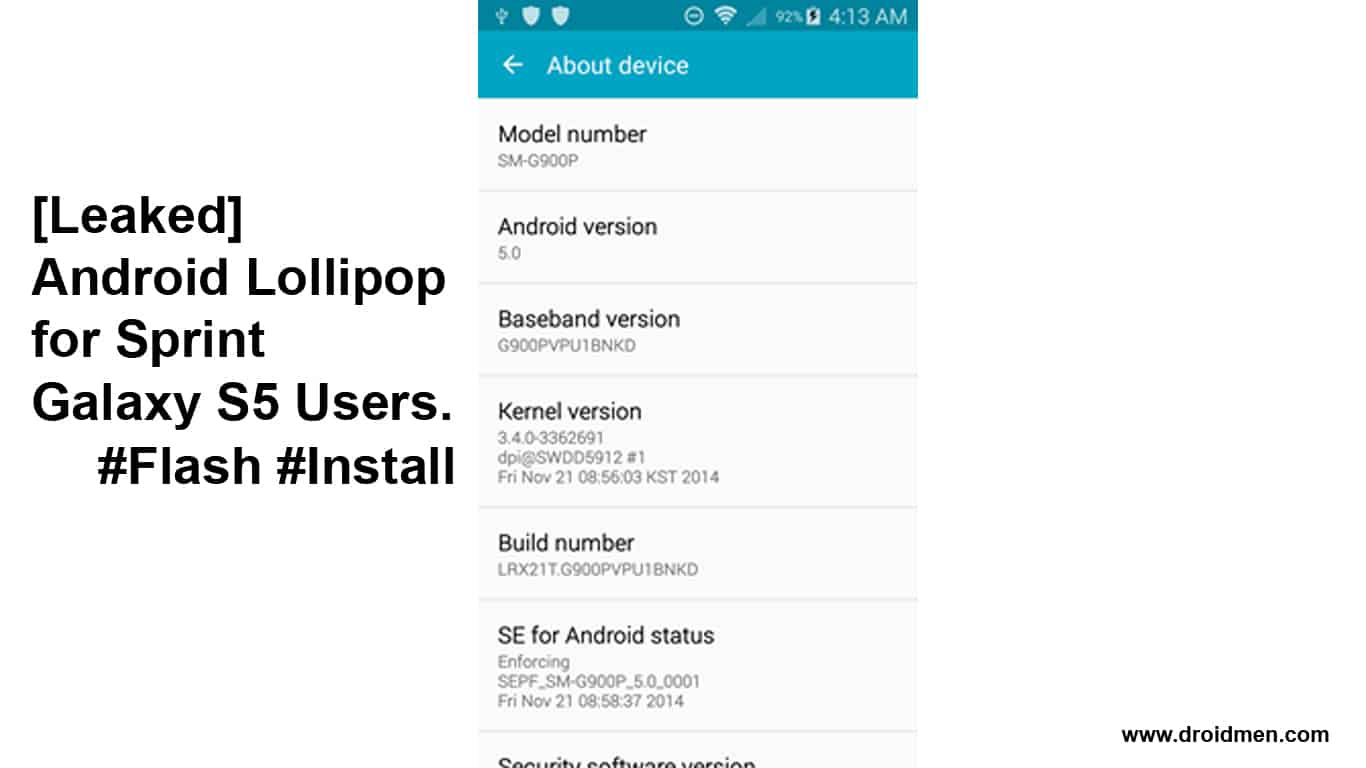 Once you are ready with all the above listed stuff then we will begin with the installation of the Leaked Android Lollipop ( PVPU1BNKD Build Number) ROM  in the Sprint Galaxy S5.

Before beginning with the steps, If you have a Rooted Galaxy S5 then continue with the steps or else navigate to xda for Rooting the Galaxy S5 (Sprint variant) and then come back to here and begin with the installation/Flashing process.

This is the main file without which you can’t decide what to install because this is the leaked Android Lollipop OS which we will be installing so just download : Leaked Android lollipop ROM for Galaxy S5 (.exe) and click on the .exe file and you will be able to extract the tar.md5 file. Save that file to your computer system.

Step 3 : Start Odin.exe in your PC/Laptop

Once you start the Odin (Executable File). Plug in the Galaxy S5 (Sprint) to your Computer System and wait for the Odin to Detect the Phone, inc case the Phone remains Unrecognized or the Phone isn’t detected then re-install the Samsung Drivers.

Once the Odin Detects the device, go to the main screen and click on the “AP button” and Find the “G900P_NKD_FullRestore.tar.md5” it would be located in the location where you downloaded the Leaked Lollipop ROM after finding it, Load that file in Odin and Hit on Start button, and you’ve started with the installation process. Once the Leaked Lollipop ROM (PVPU1BNKD ROM) is Flashed you will notice the device rebooting. You will see two reboots taking place, so don’t get worried if your device doesn’t gets booted up, once you see the Android Lollipop (5.0) Welcome screen you’ve successfully installed the Leaked Android Lollipop in Galaxy S5.

In case you have any problems regarding the Leaked Lollipop ROM do post a comment below or get in touch with me, using contact page and I’ll try my best to help you install the Lollipop OS for your Galaxy S5.

Note : Neither Droidmen nor the Author will be responsible if you end up bricking up the device, damage or any other problem which occurs while or after installation of the Custom ROM.