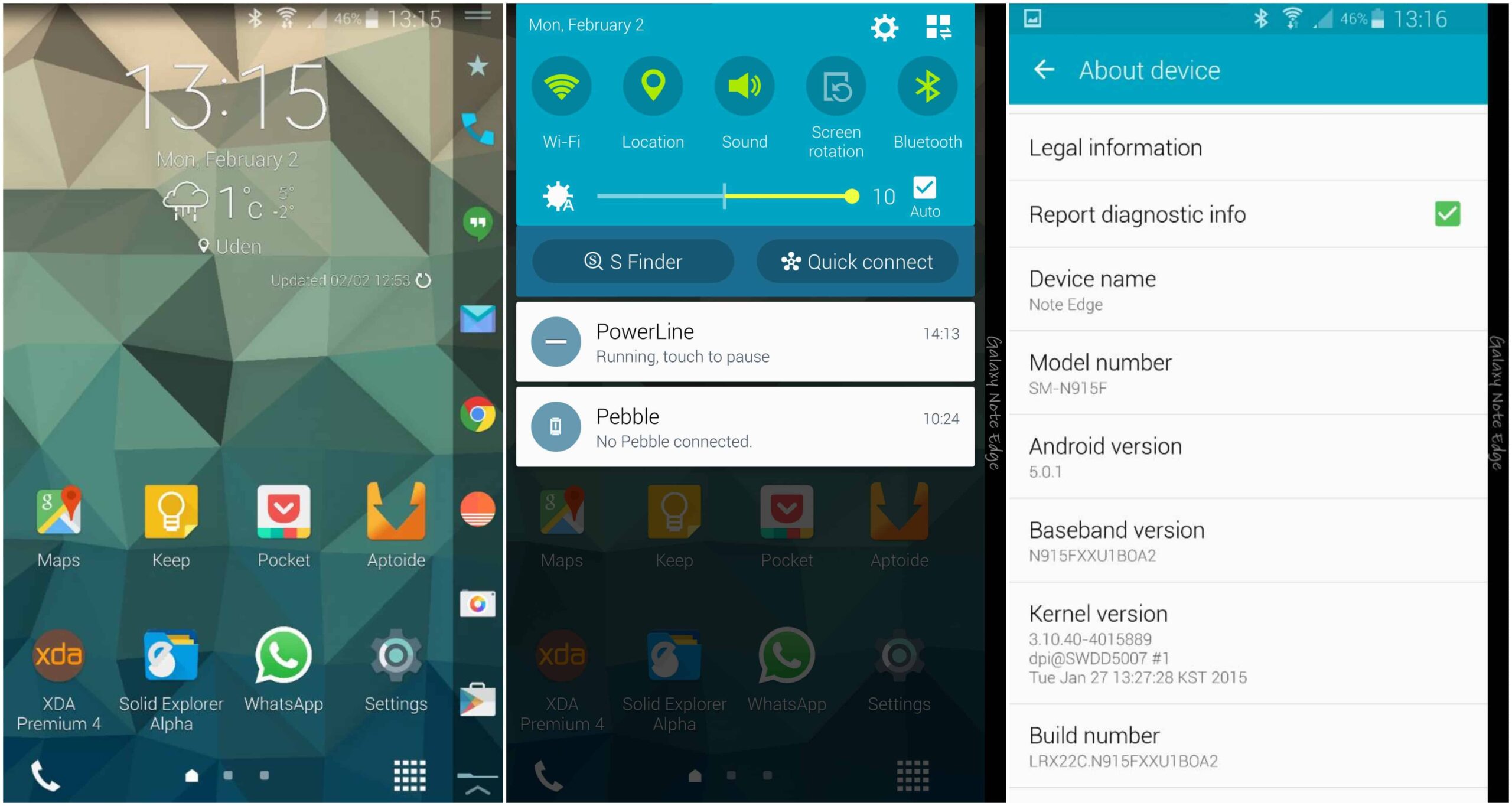 [Leaked] How to Install Android 5.0.1 Lollipop in Galaxy Note Edge.

Yes! There is a Leaked Android 5.0.1 Lollipop build which has been leaked on XDA Forum, which allows you to upgrade your Galaxy Note Edge from Android 4.4.4 KitKat to Android Lollipop. However, since it is a leak, we can’t expect an OTA update so its obvious that you will have to flash it manually using ODIN.

How to Manually Install Android 5.0.1 Lollipop in Galaxy Note Edge?

Before beginning with the steps let me tell that, this leak works very smooth as TouchWiz Framework works on Android Lollipop, However this Leaked ROM also has a bug which can make the Fast Cheetah like beast feel slow i.e the Clock Frequency, so after installing this one will have to use any External app or change the minimum clock rate frequency to 300 mHz. Other than this, there is no other issue a user might face while using this ROM. Know about the clock rate problem? still want to install? what are we waiting for, Lets begin with the below steps.

[alert-note]This Guide is for the International Galaxy Note Edge version.[/alert-note]

[alert-note]Neither Droidmen, Nor the Author would be responsible in case any Damage takes place while or after following this guide.[/alert-note]

To Flash the Stock Android Lollipop Firmware for the Galaxy Note Edge first download the firmware from the above given link, because without this you won’t be able to begin the process. Once downloaded the Firmware, Download ODIN3 v3.09 and Install ODIN in your Computer system. Once done with Downloading for the Firmware and the ODIN head to step 2.

Step 2 : Connect the Galaxy Note Edge to your Computer System.

Before connecting the Phablet to the computer system, enable USB Debugging option in your Phone, by visiting the developer tools in settings. In case you are unable to see the developer tools option in your setting, go to about phone and tap the Build Number for 7 times simultaneously, then get out of about phone and you will find developer tools, now connect your Phablet to Computer system and Enable USB Debugging mode and boot your Phone into Download Mode.

To boot into Download Mode : Turn off your Phone and Press the Power Button and Volume Down Button simultaneously.

Before beginning with the ODIN, if you are flashing a Firmware/ROM for the first time, then do install the Samsung Drivers properly and download them in case the existing drivers gets corrupted while flashing the Firmware. It is also recommended to take a Nandroid Backup before beginning. Since this guide is exclusively written for the Galaxy Note Edge Firmware flashing, It would not look cool if I add the steps to take a Nandroid Backup here.

Once the Galaxy Note Edge to the computer system, begins the main and the most crucial part of the process, so start the ODIN program and follow the below listed instructions :

Here’s how it will look after following till the 3rd instruction listed above.

That’s it you’ve successfully Flashed Stock TouchWiz Android Lollipop Firmware in your Galaxy Note Edge, Oh yes! as said above this firmware comes with a Small Bug which can ruin your Smartphone’s smoothness, so to not let it happen, just set the Minimum CPU Clock Rate to 300 mHz.

But to set the CPU clockrate the external apps would require access to the Root so better “Root your Galaxy Note Edge” and then Install CPU clock rate setters i.e No-Frills or SET-CPU or CPU Adjuster and set the minimum clock rate frequency to 300 mHz.