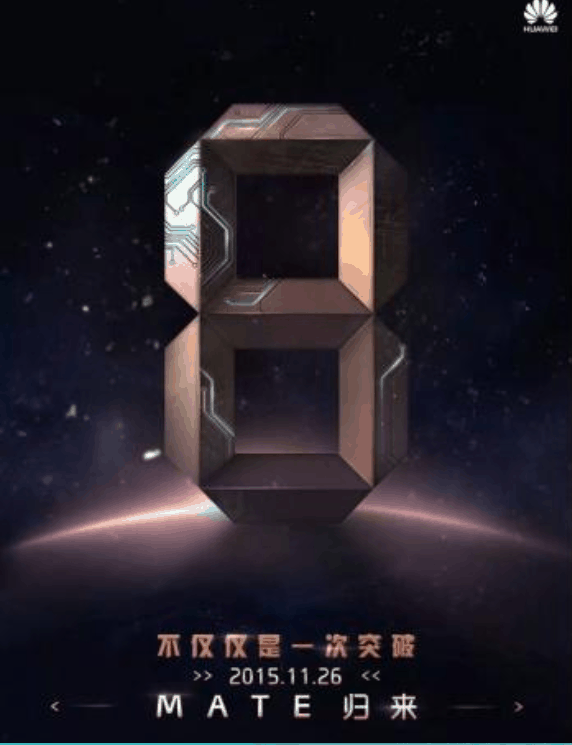 When Xiaomi is going to launch the Redmi Note 2 Pro and targeting the mid-ranged market, Huawei is making its way to compete with the Smartphone giants, Samsung & Apple. Huawei has replaced Xiaomi in China with its smartphone product line. To remind you about the success stories, this year, it also partnered with Google and came up with the Nexus 6P, becoming the first ever chinese company to manufacture a Nexus phone.

The year 2015 has been one of the best year in the company’s growth, but it seems that Huawei is not satisfied with what it has achieved, it tends to achieve more. To achieve more of success to compete with the smartphone giants like Samsung and apple, it is launching one after another “Quality” devices. To make the news more clear, it is about to release a high-end smartphone, the Huawei Mate 8, which will be a successor to Huawei Mate 7.

Coming to the camera side, the Huawei Mate 8 will come with a 21MP rear camera and a 8MP Front-facing shooter. The Huawei Mate 8 will support 2 SIM cards, It’s not very common to find “Dual SIM Phones with High-end Specs”, This phone will be competing the OnePlus Two and the Moto X Force. The phone will come with Android 5.1.1 Lollipop Pre-installed in it, However, the hardware would make Marshmallow run smooth, Hence it will get Android Marshmallow update in the form of OTA update.

GGadgetsSamsung
Read More
For those who have been wondering whether Samsung will be launching the Galaxy S10 during the Mobile World…
GGadgetsReviews
Read More
Intel, the semiconductor manufacturing company is known for the processors it manufactures. When it comes to anything related…
AAndroid News
Read More
Mi India has announced that the price of Mi Pad(16 GB) will be reduced by 2000 Rs. The…
GGadgets
Read More
Motorola’s return back to Indian smartphone market began with the Moto G 1st gen. The smartphone was a…