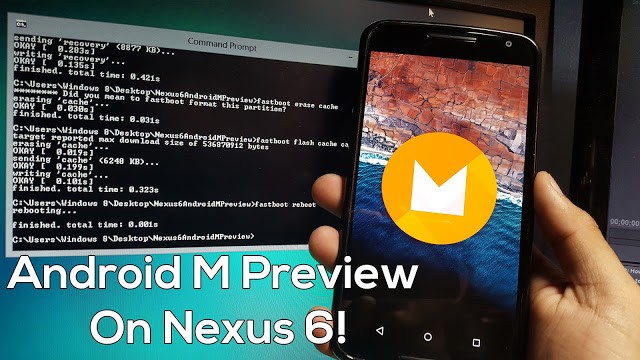 How to Install Android M Developer Preview on Google Nexus 6?

Yesterday during the Google I/O event, the search giant announced the next Android version i.e. Android M. It has not revealed what will the “M” in Android M stand for, but has released the developer preview versions for the Nexus devices. This was the same concept Google did during the launch of Android Lollipop.

Google has already pushed the Android M Factory Image for the Nexus Devices to their servers. These images can be downloaded and flashed to the respective devices for which they were built. Not everyone is good with installing Factory images/Roms to their phones. so in this guide, I’ll be guiding all the Nexus 6 users to install the Android M developer preview in their phones.

How to Install Android M Factory Image in Nexus 6?

Before beginning with the guide let me tell that, Google hasn’t revealed, what “M” stands for, You are just going to install the developer preview and since it is a developer preview there are chances you may hit across lot of bugs. In case you are someone who hates to deal with bugs then you should not flash the developer preview, but if you don’t care about the bugs and want to see the flavor of Android M in your Nexus 6 then you can begin right away!

This guide is for Windows PC users and in case you don’t have a Windows PC then you won’t be able to follow this guide. The Android SDK bundle is linked in the things required section. Download the Bundle, either Install it (if .exe) downloaded or extract it. The Files will have a SDK Manager, Launch the SDK manager and install all the drivers.

We’ve uploaded the link of the Google USB driver in the “Things required” section, If you haven’t downloaded the drivers, then download them. After downloading and installing of the SDK, Connect your Nexus 6 to your computer system, follow the below steps:

Step 3: Unlocking the Bootloader of Nexus 6.

Connect your Google Nexus 6 to the computer system in which you’ve installed the SDK and Google USB Drivers.  Open command prompt and type

In case it doesn’t work then Google search for a guide to install ADB for Windows and come back to this step, In case it works then type in the following lines one by one.

That’s all, you’ve successfully Flashed Android M developer preview to your Google Nexus 6 manually. Did you face any issues while flashing? Shoot a comment or post on our Fb page for instant support. This would be the same method for the Google Nexus 5 also, but only some changes in the file name would be required.