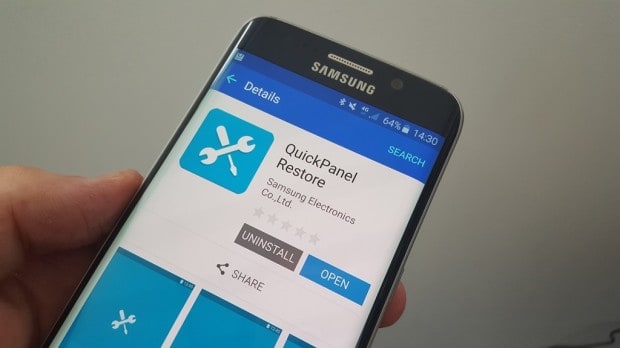 How to Get Back Missing Toggles in Galaxy S6/S6 Edge quick settings.

Have you too somehow lost the Quick Settings toggles on your Samsung Galaxy S6 or Samsung Galaxy S6 Edge, especially the ones with Mobile Data, Private Mode and Mobile Hotspot? In this article, we will help you get back the missing toggles in the quick settings.

The issue has been acknowledged by Samsung Mobile’s Arabia official Twitter account. They have confirmed that they are working on the fix. They said that it’s indeed a software issue. Since no ready solution is available as of now, the manufacturer’s have suggested users to format the phone to bring back the feature.

Many users previously reported this issue on various forums like XDA Developers and other sites. Samsung has not yet been able to reason these disappearances. A XDA Developer forum member named NimeiAltu has claimed for an unofficial solution to the bug. There is an app, that will help you restore them in your place. The app is named ‘QuickPanel Restore‘ app. Go to the Galaxy App store on your Galaxy S6 or Galaxy S6 Edge and download the mentioned app.

{adinserter 3}There is mixed reports on the fact that whether the app has been launched as a temporary fix by Samsung or it is really the solution provided by NimeiAltu. If the app isn’t from Samsung, then it’s really surprizing that they are being passive on the reported problem. In such a case, you have to enable the install apps from Unknown Source option.

If the app is from Samsung, then it’s a very good technique of making a quick solution reach the users. A software update would have taken a longer time, but the app technique is the fastest solution available on the go. It’s the same technique used by Google by putting the core apps on the Play Store and making the apps available at the user’s fingertips.

Once the app is installed, launch the app. The app has a very simple UI. The centre of the screen is a Restore Button that’s placed on a blue background. Hit the ‘Restore’ button, and it will start restoring. Wait till the process is completed. The app will show you a toast notification and you will know that the restoring process is done. Once done, you can get rid of the app i.e. Uninstall it. The app will itself prompt ‘Uninstall app’, because it will come no longer in your use.

AAndroid NewsHow-to's
Table of Contents 1. Xposed Additions2. XuiMod3. KeepChat4. XBlast Tools5. Tinted Status Bar Xposed Framework is one of…
HHow-to'sMobile Apps
Read More
Table of Contents Topics covered:Why use ODIN or JOdin?What is JOdin – ODIN for Mac OSX and Ubuntu…
AAndroid NewsGadgetsHow-to's
Read More
Unlocking the bootloader allows one to install custom roms and kernels on the android smartphone. The bootloader is…
AAndroid NewsHow-to'sMobile AppsReviews
Read More
If you have recently spent hundreds of dollars on a new Android device that has just hit the…