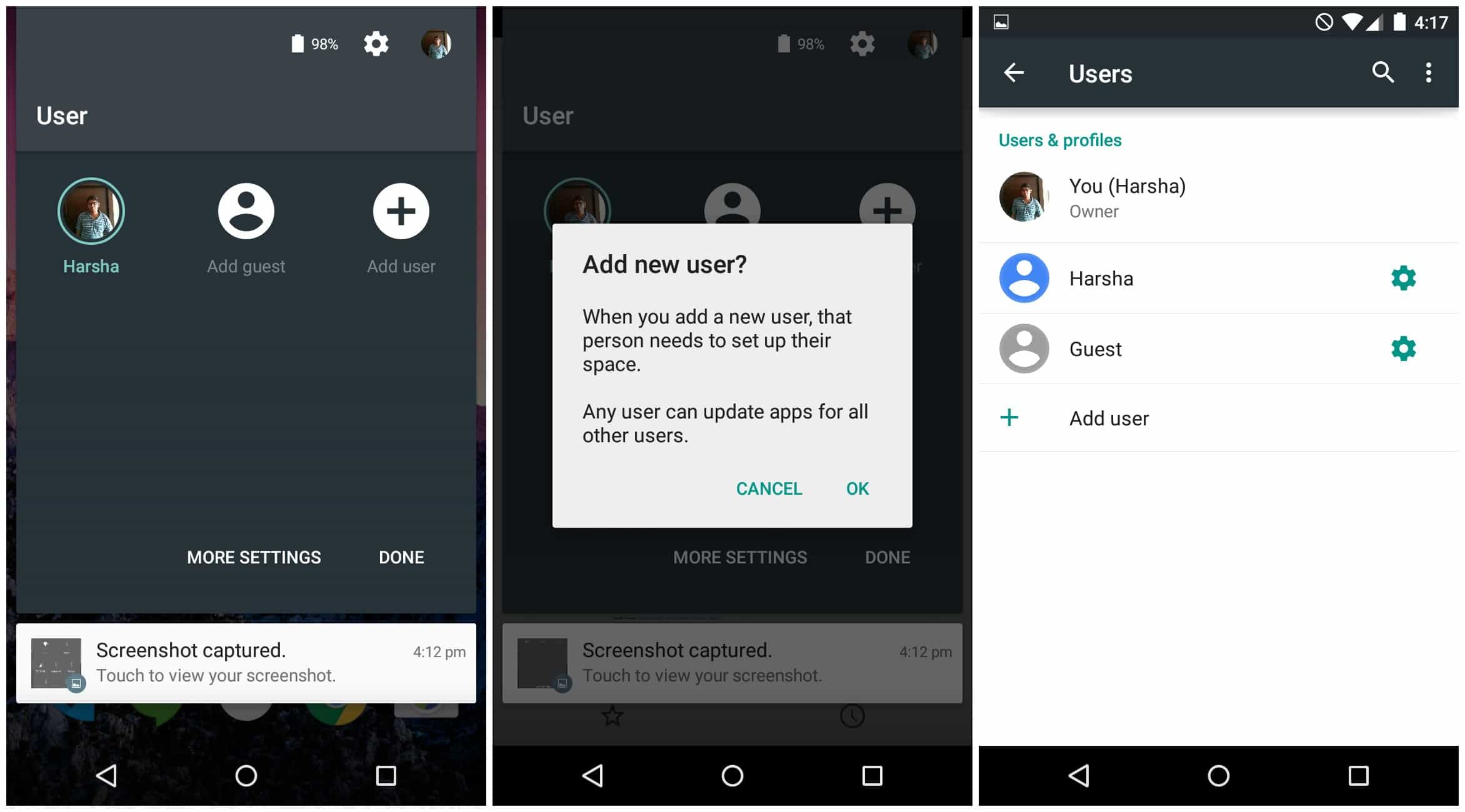 How to Add Multi-Users in Google Nexus 6

Google Nexus 6 is First Phone which would come with Android Lollipop Pre-installed in it, With the Pre-installed Lollipop it would also be accompanied by the Features of Android Lollipop and the Feature “Multiple Users” would make the data on your Phone Safe and Private. This Feature enables you to give your Phone to anyone you know without any tension of them having access to your data.

Suppose you have a Boy Friend/Girl Friend and while chatting your Mom/Dad/Friend sees you and asks you to show your Phone, you can simply switch to guest account and give the phone to them without any worries. Also read some Nexus 6 FAQs, Tips and Tricks in case of problems or queries regarding Nexus 6.

Data is Safe? How?

Well, Google Nexus 6 comes with a Feature called Multiple Users which is quiet similar to the Different user we have in our computer system, The Feature would enable you to switch the Phone in different modes and can have control over which data is to be stored in your Phone.

For an instance your Friend asks for your Phone, but you have some data say it “WhatsApp Messages” or “Some Photos” which you don’t want him/her to see, but you can’t avoid giving your Phone. So in that case you can use this Feature and switch your Phone to a Different user mode. By Default the Nexus 6 comes with a Guest Mode in it, which would enable the people to use the Phone, but won’t allow access to the Apps and the Data in it.

How to Add Multi-Users in Nexus 6 ?

That’s it, You’ve successfully Added a User to your Phone, but here is something you should be knowing if you are a User on someone else’s Nexus 6, you’ll be able to add your own Lock Screen and other settings, but something which you should be concerned of is listed below :

How to Delete Users in Nexus 6 ?

Above I explained the steps to add a user to provide him access to the phone without giving any access to the data, but now what if you added your Friend and now you are not in touch with him, what to do about the user? So I’m here to share the steps to Delete Users on your Phone. Below are the steps Listed :

But Note : In case you are deleting a User you’ve added, All the Apps, User Data will be Deleted. The Apps whose data was shared would remain in the Phone, but all the external apps that the User has installed and the Data in it would get Deleted.

Will this work for other Phones Operating on Android Lollipop ?

Well, Certainly Yes, you can add multi-users to any phone operating on Android Lollipop OS. But not many manufacturers have released the Lollipop OS, Samsung is working to bring in the TouchWiz UI on Lollipop, on the other hand Micromax has no answers regarding Android Lollipop because it has got CyanaogenMod with it. But the method would remain same, but the steps may change in case of other than Nexus and Motorola Devices-