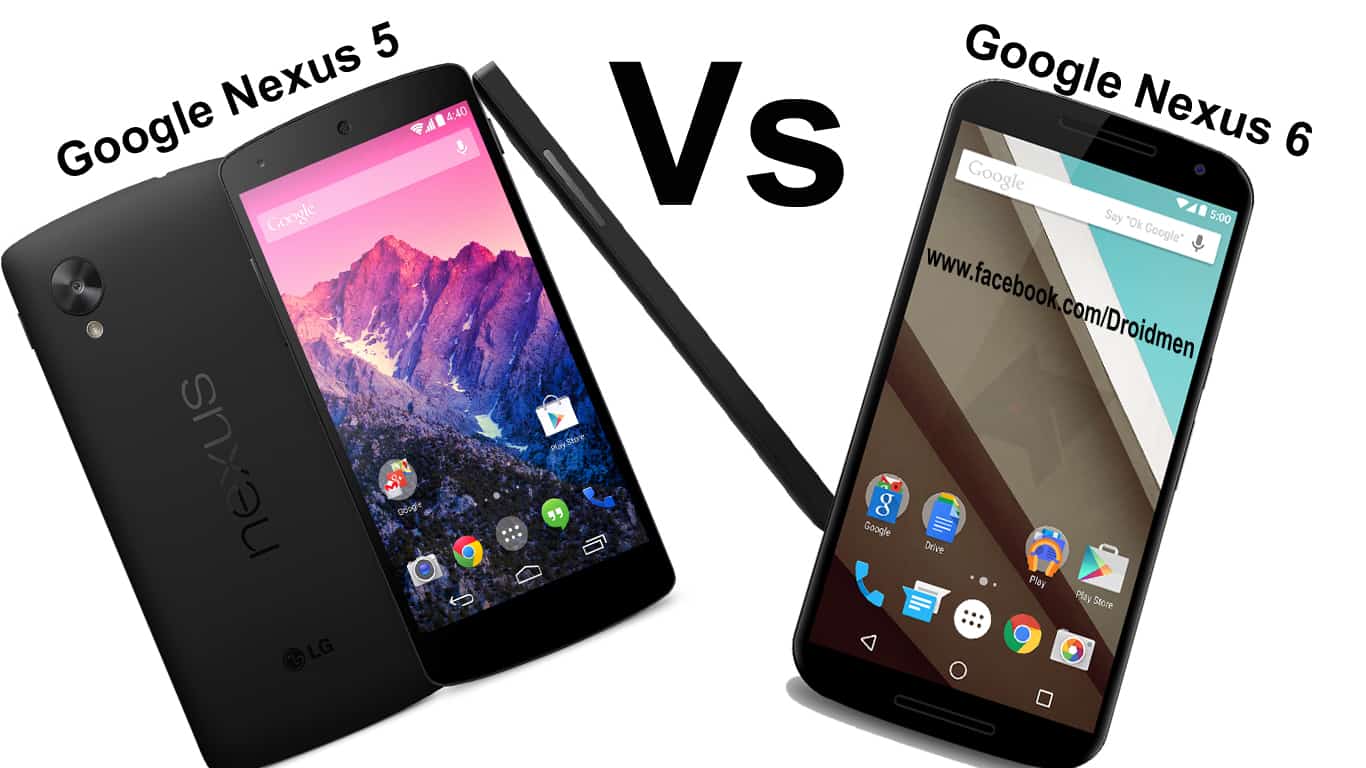 Although at present Google Nexus 5 is out of stock on Google play there is a new page for the Nexus 5 that also has the “Buy now” button and it also shows the phone running the now latest Android 5.0 Lollipop mobile operating system.So it was necessary for us to compare both these devices.

Price is one Factor which would determine whether the phone would win or not, Always being Cheap doesn’t lets the Device to win, nor being Costly enables it to Lose. The price based on the quality and specs provided should be the least, that would give us the hint of the Winner. The Google Nexus 6 comes with two memory versions namely 32GB and 64GB with the pre-order prices starting at $649 whereas the Google Nexus 5 Price starts from $349 for a 16 GB Nexus 5. If is it only about price then off-course the winner is the Google Nexus 5 as it is cheaper compared its successor the Google Nexus 6.

Design is one other basis on which one could select a Phone, Some people like Flat and Slim Phones whereas some other like Slim and Curved Phones, Well the Google Nexus 6 looks nothing different than the Motorola Moto X Second Gen but just has a Nexus Printed on the Backside. When comparing Google Nexus 6 with Google Nexus 5 we could say there is no much difference in Google Nexus 6 and Google Nexus 5’s Design

The Google Nexus 6 is damn slim and looks attractive, No matter Google Nexus 5 was ruling the Smartphone market but its successor would just change the game and would attract people to buy it!

Operating System, Both the siblings would operate on the Same operating system with different versions, The Google Nexus 6 would work on the Android L (Android Lollipop) which is the latest Android Operating system till date (Not available for all Phones)

Nexus 6 with it’s massive 3220 mAh battery assisted with the power saving features of Android Lollipop 5.0, should last for a couple of days with a single charge, and even when it runs out of juice,it can be quickly topped up  with 6 hours of use from only 15 minutes of charging with it’s Turbo Charger. Google Nexus 5 lags here with it’s comparatively smaller 2300 mAh battery, but it does come with Qi Wireless charging capability and the Lollipop power saving features will add more life to a single charge.

The Nexus 6 comes loaded with a 13MP with optical image stabilization rear camera with Dual LED ring flash and f/2.0 aperture, it can capture 4K videos  at 30fps while the front camera is 2MP with HD video conferencing capabilities. While the Nexus 5 has a 8MP rear facing camera with Optical Image Stabilization a 1.3MP front facing camera.

GGadgets
Read More
Sony is among some of the biggest names when it comes to the markets of technology. The company…
GGadgets for MenGadgetsGadgets for Women