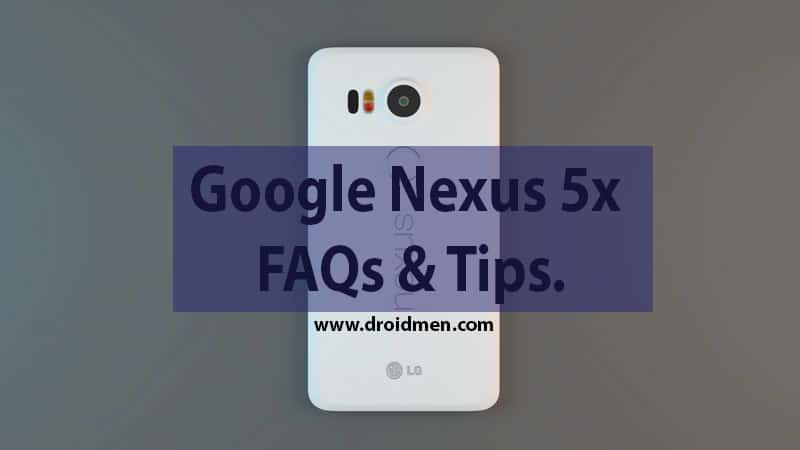 Google Nexus series has always attracted the freaks who love the stock Android OS. These phones are known for giving stock android experience and are the first one’s to get the latest Android updates. This year, though, Google has a treat for us Android fanatics.

{adinserter 3}They are launching not one, but two smartphones, yes you heard it right; Two Nexus devices. The first of them is the LG-made Nexus 5x, successor to the 2013 nexus 5 & the second one is the Nexus 6P successor to Google Nexus 6. Though, the Nexus 5x hasn’t attracted us much with the specs, In this guide, we will be answering some common doubts and questions about the Google Nexus 5x which a potential buyer might want to know.

Jump Directly to the Question:

What colour will the Nexus 5x be available in?

The colour combination matters a lot, they make the device the way it looks, The Nexus 5x will be available in three colours: Quartz White,  Charcoal Black, and Ice Blue. Although that Ice Blue looks more like mint green to me in the leaked images. But we shall see that next week in the grand reveal!

No, the Nexus 5x comes with a 5.2 inch 1920*1080 capacitive IPS Touch screen. The Full HD screen was probably used to keep the costs down as well as conserve the battery life. Having a 2K display can make the quality of the things you see on the screen better but can affect the battery life and the performance of the phone as the read and write speeds of the memory decreases with the use of HQ display!

No, The Nexus 5x comes with a rather measly 2700mAh battery. Fingers crossed we get better battery life this time around since the Nexus line is infamous for it’s slouchy battery life and potato cams.

So, how are the camera’s on this phone?

Who doesn’t like capturing High quality image of the moments that happen in their lives. Well, going by the spec sheet, it is going to have a 12.3 MP snapper at the back and a 5 MP selfie camera. Optical image stabilisation should also be present and so will 4k recording in the back camera.

In case the stock camera apps aren’t good with the processing of the image, you can try out apps like “Open Camera” to experience stock photography or download apps like “Camera 360” which helps in making the photos beautiful.

What storage options will be available?

These days the storage capacity of the smartphones is increasing, The Nexus 5x will be available in two variants i.e. 16 GB and 32GB , and as with the nexus line up, there are no microSD card slot present. I guess Google really does want everyone to use their cloud services more!

Will it sport a USB type C port?

USB Type C is the new trend among the smartphones these days, OnePlus Two was the first Android phone which supported the USB Type C. The Nexus 5x will also sport the reversible USB type C connector! So no more fumbling about in the dark while charging your phone at night! Woohooo!

What about Quick Charging on Nexus 5x?

Having a phone which gets charged without having any effect on a battery is what everyone wants, but not all manufacturers are able to provide, the quick charge facility does have effect on the device’s battery life, but it is worth having. The Nexus 5x will support Quick Charge, as we have Qualcomm Quick Charge 2.0 out of the box with the new Nexus 5x!

What other stuff will be bundled in the box pack?

People are always interested to know about the things that will come with the smartphone. With the Nexus 5x you will get a Quick Charger, earphones, a bunch of documentation and, of course, the phone itself!

The Nexus 5x will be powered by the Adreno 418 GPU so expect games to fly on this device!

Will it overheat, though?

Well, when the phone isn’t used, no phone heats up, but while gaming and charging the device with a bit of multi-tasking, the phone gets heated obviously, If LG would have added the Snapdragon 810 in the Nexus 5x then, there were chances for the phone to see overheat on a regular basis, However LG has ditched the overheating Snapdragon 810 and gone with the hexacore Snapdragon 808 clocked in at 1.9 Ghz. It is a much more balanced processor that provides great performance without frying your hands.

So is 3 GB RAM enough for the RAM eating Android OS?

Yes, it is sufficient enough for one to play high-end games and multi-task, There are phones which still have 1GB of RAM and work good. Snapdragon 808 and 3GB of RAM, gives a balanced performance and there will be very less free RAM, which means less wasted RAM.

Which version of Android will it run?

It will ship with the latest Android 6.0 Marshmallow and as everyone knows Nexus phones are the first ones to see the upcoming Android version in the form of Developer preview. So when any new OS version arrives, The Nexus 5x will be one among those phones which will get quick Android updates.

Will it have NFC?

Google has recently launched Android Pay, and you can be sure that the Nexus 5x will include NFC among its bevy of connectivity options. Outside the US, there are very less people who use the NFC, not having the NFC made the OnePlus Two a non-flagship killer phone, having this would certainly help people in payments using Android pay and other services.

How about dual SIM slots?

No, the Nexus 5 will come equipped with a single Nano sim card slot that will support 4G/3G/2G and VoLTE in some specific carriers. if you are still thinking of getting a Dual SIM smartphone then you can go with the OnePlus Two.

Will it have a fingerprint sensor?

Yes, it will have a fingerprint sensor just below the camera hump on the back.

Will it be waterproof?

Nope that doesn’t seem to be on the cards.

So there you go; hopefully, we have been able to answer most of your queries on the new Nexus 5x. Now we have a question for you.

Will you buy the new Nexus 5x?

Leave a comment down below and share this among all your Android loving friends across social media. All aboard the Nexus hype train!