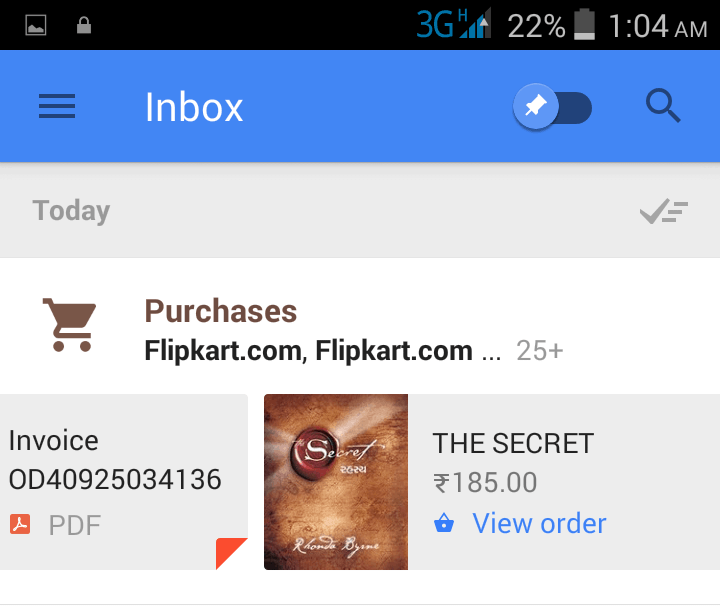 Google Inbox is more of a program than an app, as Google inbox can also be accessed on web : Google Inbox Web. But we are making this post limited to the App only. So Let’s begin with it, before you leave the page (Getting bored from reading the introductory thing)

But here we will just talk about the features it provides via the Android App for accessing inbox on Android (Psst, there are some reviews on play store that the phone does not get any notifications for inbox(not gmail). We did notice that too, but the notifications for inbox are enabled by disabling the gmail app in the device.)

The Look and Feel

Google has updated most of it’s apps and made it look like Material Design, the Google Inbox Android App also has a material design, well it looks beautiful and has attracted many people. When it was used by me for first time, I felt very easy using it, I found all the things sorted well and could find things according to the categories. Now without wasting time let’s move towards the features of the Google Inbox App.

It comes with 7 bundles namely Travel, Purchases, Finance, Social, updates, Forums & Promos. Basically inbox bundles the mails that should belong to each category and thus try to solve the information overload and clutter.

For instance all the emails with electronic boarding passes are bundled under Travel so that you can find them there easily, and yeah they have related thumbnails so your eyes and fingers don’t have to work hard to find them. I was able to find all the tickets I booked without wasting much of time. This can also be used to find out, the dates on which you were travelling!

If you buy a lot of stuff online, which everybody now does. Your emails with invoices and mail tracking links are bundled in a neat manner in the purchases bundle. In regular Gmail app you still have to open the email and hunt for the link that took you to the order while inbox preferences the order links and places them along with the thumbnail from the order, so you could easily track the order and do the task whenever.

The Finance bundle takes care of sorting out all your financial emails i.e. Bank alerts, Bills, Bank statements, and any other mail which relates with Finance.

As you can see here,the emails by my bank (Axis Bank) are bundled under finance and have a “S” symbol for statements and “A” symbol otherwise and they are also set apart according to months. The other bundles too provide similar functionality.

This is the place where inbox has borrowed many features from Google. In an email I received from a friend there was a beautiful photograph he had clicked. I had the option in the reminder creation to call him about the same and inbox fetched his number for me. And with the location services services turned on you can actually type “call (a institute’s name)” and inbox will fetch the number of the institute’s branches near you,and the number will be there on the reminder and ready for you to just tap on it to call and accomplish what the reminder was about. So your contact list as well as numbers on local google pages are there on your to-do list.

Last but not the least, the add button on the right bottom corner, can create emails, reminders and can be used as a speed dial to email last contacted person. The Red-Add-Button can be used to invite people by using their email address, well the number of invitations you could send are limited in nature.

The Specialty of the Add button, is when you click on it, the recent people whom you’ve sent a mail’s contact also appears on the top, this shows that Google Inbox not only categorizes the stuff and mail you get, but it also gives priority to the Conversations.

Want an Invite? Yes, Comment your Email Address you will get an invite within 24 hours!