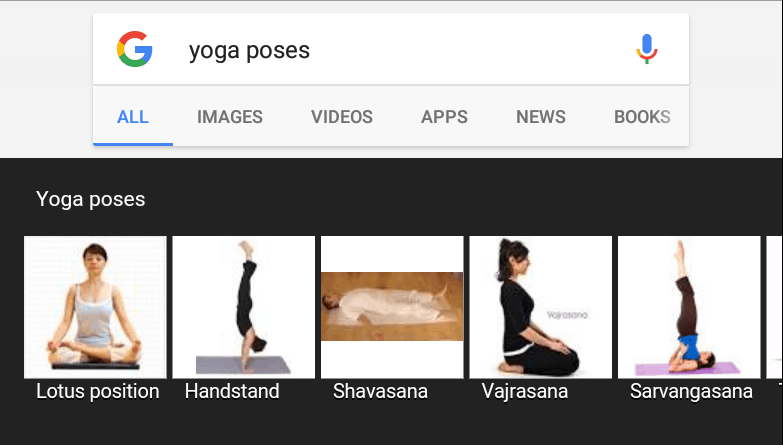 Google has started rolling out Yoga cards on its search app. These new search card are for yoga beginners, and are launched around New Year to help Android users stay on their fitness resolutions. If you do not know any names of particular poses just search Yoga poses on google to see the numerous pose cards google has to offer.

The yoga cards appear when a user searches for a particular yoga pose. For example, searching for Lotus position in google shows the card consisting of images for that pose and some specifics of the yoga position.

The expanded Yoga cards inform about the parts of the body that are strengthened/stretched by that particular Yoga Position. As it is with all exercises, there are difficulty levels in Yoga and so the Yoga cards also show preparatory poses, and follow-up poses . The following images are for the ‘Lotus Position’ google card

These cards are available on searches done in browsers as well as Google now on Android.

MMobile Apps
Read More
When abroad in an unfamiliar country, your smartphone can often become the most useful thing you own thanks…
MMobile AppsOn Screen
Google Home is Google’s answer to Amazon’s Echo. Even after being made by Google, it has not impressed…
MMobile AppsPersonal Tech
Read More
Table of Contents Five Best Payment Apps for 20201. PayPal Benefits of Using PayPal2. Google Pay Benefits of Google Pay3.…
HHow-to'sMobile Apps
Read More
With the help of online business, companies are generating revenue in a bigger scale. Now, most of the…