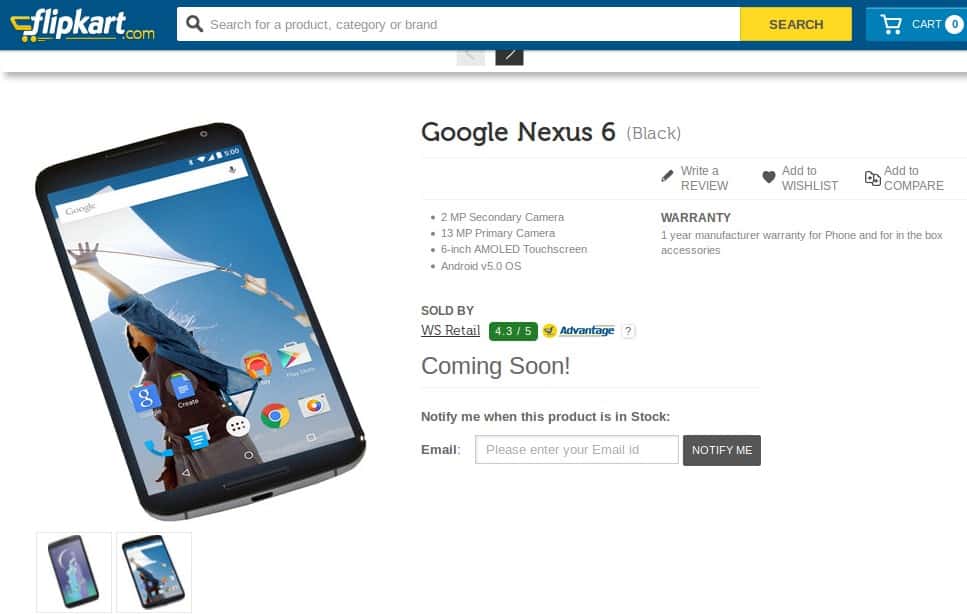 Less than a month ago we compared Nexus 6 with Nexus 5. and now Nexus 6 is listed on Flipkart, which signifies that the Nexus 6 is coming soon to India.

Nexus 6 has created a lot of waves in the international smart phone arena, since this is the first time a Nexus device is directly comparable to other flagship devices.

Other thing to notice here is that Nexus 6 is the first device to ship with Android Lollipop running out of the box. The Nexus 6 has a 6 inch Amoled QuadHD 2560 X1440p screen,2.7 GHz Qualcomm Snapdragon QuadCore 807 processor with Adreno 420 GPU, 3 GB RAM, a 13 Megapixel primary camera that can record  4K videos, 2 Megapixel secondary camera, and all these features are powered by a massive 3220 mAh battery.

While the iPhone 6, iPhone 6 plus and Galaxy Note 4 all being priced above Rs 50000, If the Nexus 6 is priced at the US price of 649$ i.e around 40000 Rs, this could be a cheaper alternative to get a brand new flagship device that too with Android Lollipop.

With Motorola (the manufacturer of Nexus 6) being successful in India with its Moto E, G and Moto X devices, this release of Nexus 6 in India is a sign of premium devices being launched in India simultaneously along with other countries.

Earlier the enthusiasts had to get their devices shipped from other countries and be devoid of the warranties. While this launch with Flipkart will mean that the buyer will be able to get these devices at the listed price with Flipkart’s 30 day replacement in-case there is a mishap.