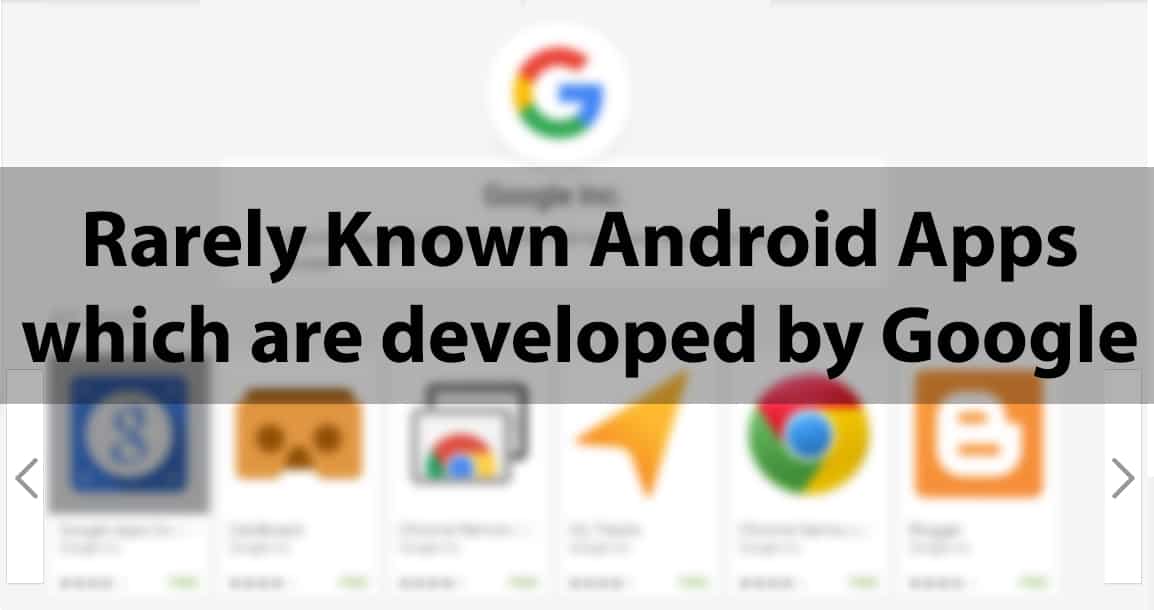 Google Play Store is one of the most well published and updated app store. There are plenty of unique and useful applications available for all targeted users. Google is said to be the most active app developers on Android app store.

{adinserter 3}But how many of those Google apps are you aware of? Not considering the well familiar apps like YouTube, Google Maps, Google Photos, Chrome, Hangouts and few other apps. Well, we have come with a list of Google’s “other” apps which are lesser known and are useful. Let’s get started with the app list.

Snapseed is possibly the best photo editing app available in the Android app store. There are some features available and the rest of them you can find it in Google Photos. It is a far better option for editing photos clicked from your phone.

Snapseed was only available of iOS and desktop devices, until Google acquired it in 2012. It a very good platform which provides cropping, tuning and transforming your image by applying different effects. It has pretty cool presets.

Google Handwriting Input allows you to “type” or we can say write your input in your handwriting. You can write with your finger or if you have a stylus. As soon as you write it will be converted to a typed text.

Using Google handwriting input app we will be able to type texts and reply to the messages, even when doing some task which involves one of our hand. It generally isn’t easy for right-hand people to type using their left hand alone when right-hand is indulged in other tasks, hence this app makes it easy for the left hand to enter things into the text field/area.

My Tracks records your complete range of outdoor activities be it hiking, biking or rock climbing. If you are more of an outgoing adventurous person you should get this app. Once you feed your location it will track you via GPS and will keep track on your speed. You can see the activity sessions with maps, graphs and detailed stats. You can also share your activity sessions.

Androidify lets you create Android characters which look like your friends or family members. You start off with a naked droid and then use your creativity to dress them up as anyone you want. You can create emoticons, animated GIFs and pictures.

You can also share it with everyone in your posts and chats. You can also post your best creations to the Androidify.com Gallery to grab a chance to feature it among the Android characters around the world. To remind you, a part of Droidmen’s Logo is also created using Androidify, isn’t it a great app now? I end up spending a lot of time with it when I start using it for once.

BEST ANDROID APPS EVERY ANDROID USER MUST USE!

My Maps is an interactive map service. If you’re planning a trip, finding apartment, bird sighting near your area etc. you can use this app. You can start off by your starting point, add specific locations and mark them, draw lines, plot a route and can name the path and describe it. This can also be done by accessing it from web. You can also share your route with other Google users.

Though this app provides a great functionality, it brings things you want on your screen with just some gestures, but it’s not known by many people, This app would help people who forget about where they’ve placed a particular app/file.

Google Gesture Search allows you to draw the letters of the alphabet of any particular app instead searching for that app in your phone. It asks you for a category you’d like to search in such as contacts, apps, settings, games, music, browser so you can find app, song, a person or a link immediately. You just have to draw an alphabet and it will give you a set of results you’re looking for.

Google Spotlight Stories is a 3D interactive video story telling. The concept was laid when Google owned Motorola for a very short span of time, among the many interesting new smartphone features lied this 3D interactive video thing. It can almost be like extended vdesion of Google Cardboard as the app involves the phone to view the video in a 360-degree virtual reality environment. This app has few “free” stories which you can enjoy sitting anywhere.

We all have some or the other time in our life helped our family members figure out their “tech” problems but now with Device Assist they can figure out mobile problems on their own. Initially when you open the app, it will ask your experience level and according to that it will show you tips. These tips include direct links to settings menus or a pictures with explanations. It makes much easier for a first time Android user and will help them fix their problems faced with the device.

Chrome Remote Desktop is the most useful app, once you download the app on your phone, then you add this companion extension your chrome browser and then you will be able to access your desktop from any place on the earth.

Chrome Remote Desktop is way ahead than its competitors such as LogMeIn and TeamViewer which can give you remote access to your desktop from anywhere. But using this once you have logged in from both the devices all they ask for a PIN and then you will be able to access your desktop and control your computer without any physical access to it. I’m sure, 80/100 people wouldn’t know about this app, if you are one among the other 20 then please do comment and let us know!

Google Goggles app is immensely useful. You just have to capture an image and Google will provide details related to it. For instance you are at some place and you take a pic of it, and use Google Goggles to take out information, it will update you with all its history and present information. You can also use it for translating text, look up prices by scanning bar code, import business cards directly to your contacts, solve sudoku puzzles, etc.

Meter is an experimental app by Google aka Google Creative Lab. It is a unique mixture of Material design, useful data to be displayed on your screen and live wallpapers.

You can select the information you want to display on your screen and it will generate a geometric pattern that is represented by a love wallpaper. Information such as Wi-Fi and Cellular signal strength, battery percentage and notifications can be displayed. Isn’t it too creative?

Own a chromecast? This might be of interest to you. This app basically helps you to turn your TV into an interactive photowall using the Google’s chromecast.

Google will never disappoint users when it comes to uniqueness and creativity. They have developed Photowall for Chromecast, which allows users to collaborate with images in TV using phones and tablets. When you’re finished a YouTube video for you Photowall will be automatically generated which is ready to share to everyone who were part of that event.

Google Creative Lab has developed this app called Tunnel Vision for people who tend to make trippy videos from their phone. It is a very cool toy, you can download it and experience it for yourself.

There are six different distorted filters available and the speed can be adjusted by a small slider at the bottom. The videos are saved in MP4 format and they can be easily saved and shared.

Got a gang of friends who can challenge each other? Big Web Quiz is here for you. It can provide you hours of fun. Max 5 people can install this app on their device and can connect to same Chromecast where questions will be formed and be displayed. Each player has to submit answers within limit of time and their scores will be displayed on the big screen after each round of questions.

Ingress is for people who enjoy the virtual game world. It converts the real world landscape into global game of mystery and competition. This augmented reality game was initially created by Niantic Labs. This can not be played while you’re sitting on your couch, you actually need to get out there and explore places around you.

Yet another creation of Niantic Labs is Field Trip. This runs on the back of your phone and pops up a notif when you’re around an interesting place, it can be useful when you’re visiting or traveling in a new city or to know about your own hometown.

You will be notified if you have got something interesting nearby your area. There are cards which describe that particular place. You can also choose a category and then it will suggest you places of your selected interest.

So these were the not-so-well-known apps by Google which were in dark. You can use them and let us know how helpful they were to you. If you come across any other such apps developed by Google let us know in the comment section below.