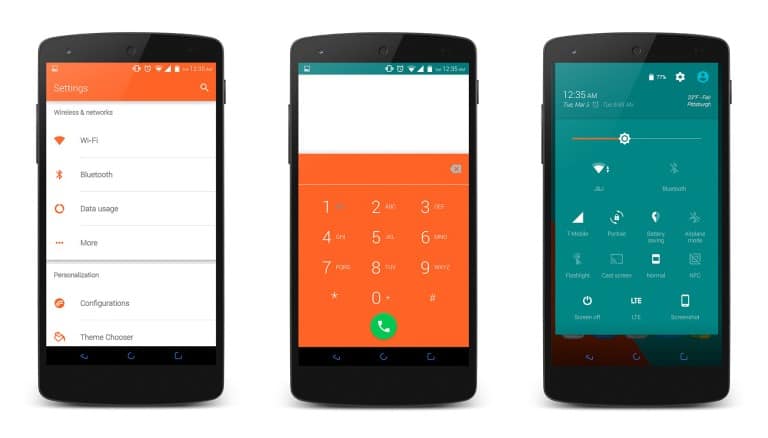 Android Lollipop has been one of the most different android update ever. The Lollipop update doesn’t only brings in the concept of materialistic design but also comes with a lot many unlocked APIs which could make developing on the platform easier. CyanogenMod, an android community which makes custom roms for android devices. If you aren’t aware about CM12, then CM12 is referred as Android Lollipop version for CM12.{adinserter 3}Though Android Lollipop looks “colorful” but everyone has a different taste. So for people with different tastes,  Themes let you select the taste of your choice. In this post you will be introduced to 5+ best working CM12 Themes to make your device look the way you want. So lets begin with the list.

The name itself suggests about the theme. This theme tries to give the glossy look to the materialistic design of Android. It makes the elements on the screen translucent. Every element used to make the theme is translucent. You open Play Store or Settings app or any other Android app, you will see the dark black hue interface and not the regular background of the apps.

You will be allowed to apply the theme styles at the following areas: Status bar, Navigation bar, wallpapers, lock wallpapers, boot animations, keyboards, notifications, icons, fonts. On top of all such features, the theme is free of cost and works smooth.

Though it is one of the best themes for CM12, but there are some cases which might cause problems to theme. To overcome the problems you can check the Theme Notes in the description section of this app on Playstore.

Mind is another great CM12 theme which comes with the combination of two attractive colors – Orange and Turquoise Blue. The turquoise blue notification bar with orange accent and white icons creates an impression on the first look.

This theme scheme is applied to the entire UI and works with many apps like WhatsApp, Facebook, Instagram and many stock Android apps. The color makes the main color of these apps as “Turquoise Blue” and “Orange/White” as the secondary color and “White/Orange” as the supporting color.

Though it looks perfect and is a decent theme, users have reported that they’ve faced bootloops after installing the theme. The developer has asked the user not to apply the theme on “Bootloops” for stable usage.

No issues were reported by any user in the reviews, but in case you face any issues you can contact the developer. In case of boot loops you don’t apply the theme for boot animations.

End? No this list is not going to end, We will keep updating! You can simply comment the Free CM12 you are using on your phone and why do you love it, if we really find the theme attractive and worth coming under the list of best CM12 themes, then we would surely update the post and add with proper credits to the one who has referred it!