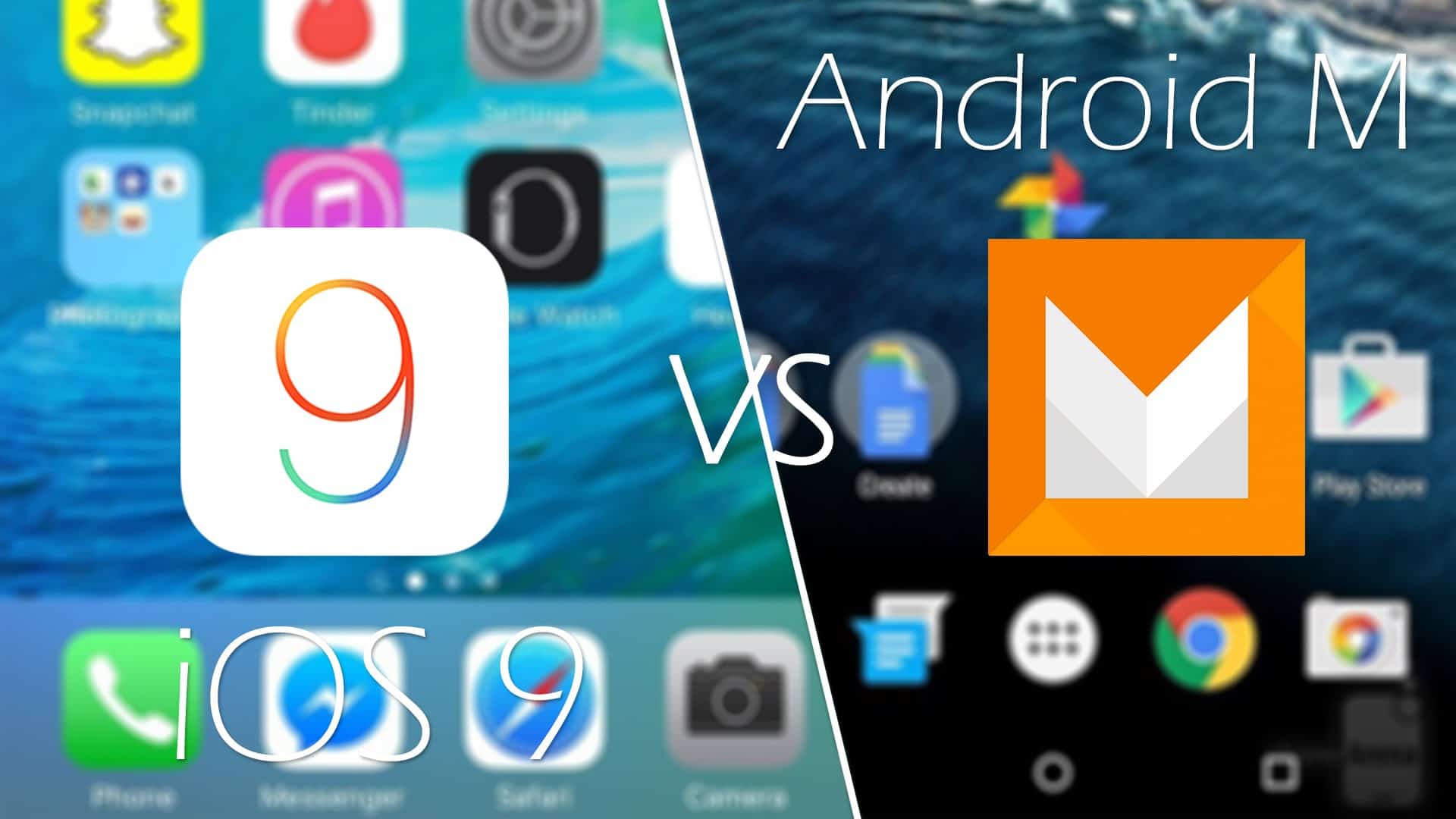 Android Marshmallow Vs Apple iOS 9 Comparison: Which one Wins?

With Android releasing its latest version Android 6.0 Marshmallow at Google I/O and Apple launching its new OS 9 update at its event WWDC. Get the comparison between Android Marshmallow vs Apple iOS 9.

They got people grooving about both the companies updates and new features added to the existing one’s.

Apple has pushed an update to all of the iOS users on 16th September, itself. Google, however has not notified all nexus about the updates on Nexus devices, but they have launched them on official site. The non-Nexus users will get the updates later about Marshmallow vs Apple iOS 9.

It is a fact that most of the Android Developers use a select all on Mac or OS X based system to develop Android apps.

1. Interface of Marshmallow vs iOS 9

Both the operating systems ace in their own functionalities. It is irrelevant to compare them, but from the user’s point of view it wouldn’t harm to compare these two bog shots and be well aware of their updates. If you’re a hardcore apple user with all apple devices in your hands.

Android Marshmallow update won’t be big-a-deal for you. And if you’re a dedicated Android user, iOS 9 update won’t be much of importance to you, but here is a stack up anyway.

Android Marshmallow has is an extended version of Android Lollipop with its feel of Material Design. It has some new feautres such as vertical scrolling app drawer, a new-look clock, search bar in apps list. Material design was well cherished in Android L so they continue to charm us again with updates.

We can also set our themes in two ways- Light theme and Dark theme, there are adjustable Quick Settings and status bar, a rotating home screen, visual voice mail, all new RAM manager and storage and battery sections.

Whereas Apple has come with a touch dependent interface. It measures the pressure you put on screen and seamlessly traverses you through pages in apps. Also Read: Android KitKat Vs Android M.

This tracks the usage of your phone and location of what you’re doing. For instance if you’re in gym and plug in your headphones it will directly play the workout playlist. Majorly they have focused on adding “Intelligence” to the OS.

Download Sync Mate for MacBook or iMac or OS X from here.

Battery life is an aspect which has been a question in smartphones, be it Android or Apple, both have unsatisfied users when it comes to battery life. They have this time brought an update. Many Android Marshmallow Phones might also come with removable batteries.

Android Marshmallow has a “Battery Save” mode which can be turned on when battery is low, or when your phone is not active. This feature is called “Doze”, it detects activity of your phone through motion, and if you’re not using it will power down your phone.

Apple on the other side has USB-C port which renders faster charging. It has a “Low Power Mode” which will improve the battery life. well they have certainly been inspired by Android phones.

Both the companies have worked equally to upgrade their digital assistants. It is a feature that is used widely by all the users so they have improvised lot many things, they can brag about.

Android Marshmallow has Google Now on Tap, with this feature Google will see in which app you are and will give you search results on that. Isn’t it amazing? For instance if you’re listening to some song in your music player, and you just speak “is he alive?” or “is he going to do any world-tours?” it will give you bunch of answers to the relevant artist you’re currently listening to.

Similarly if you’re texting anyone about your dinner plans and you just tap on Google Now it will give you list of hotels around you to dine.

While Siri is advancing in similar contexts. It will crawl through your mails and text messages and will track the person you have been talking to and suppose you have meeting with that person it will place that person on your home screen and you’re just one tap away from calling them.

Also, if you get call from an unknown number Siri will browse your mails and texts to give you results about the person who is calling. Well it is quite similar to what android has been doing since 2013, but kudos Apple.

Do you know how to install third party Android Apps ‘APK’ on Android TV? Keep reading to know knoe about this topic.

With Android Marshmallow, Android OS now wont allow third parties apps to access your passwords, i.e it allows you to grant permissions to basic apps that includes access to microphone, contacts, medical data and more. It is a borrowed feature from Apple, but hey Apple is also happy accepting some features from Android. This improves the “all or nothing approach” and the users will be relieved with it.

Whereas Apple has the best satisfies users when it comes to privacy. Third party apps are never a botheration or breach user’s privacy. iOS 9 continues to have the same old privacy features but still its intact in keeping privacy of users and protects your data just fine.

Android had a feature regarding the mobile payments, known as Google Wallet, they re-framed it to Android Pay by making major changes. It has a fingerprint scanner which is supported on all Android devices. Does it mean more devices will be compatible with Marshmallow vs Apple iOS 9? Um, YES.

Where Apple is expanding its feature Apple Pay by including access to TouchID to read fingerprints faster, and now it also supports loyalty cards.
It is also expanding onto new markets, from July it has started Apple Pay on public transport in London and will be compatible with 70 percent of UK credit cards.

It is too soon to make a comment on who will be a long time ruler, as Android M has still not completely reached to every possible user. These updates are either going to win over switchers or they will be unaffected.

Anyway, Marshmallow vs Apple iOS 9 is good to see both the leading companies trying to incorporate each others best features and keep their dedicated users up-to-date. Both the operating systems have borrowed so many features from each other that they might become doubles of each other in near future.

AAndroid News
Read More
The OnePlus Two is one of the most hyped smartphones. The hype created by OnePlus Two reminds me the way…
MMobile Apps
Read More
Table of Contents Finding a Free Video Editor For YouTube: What to Look ForThree of Our Favorite Free Video…
AAndroid NewsGadgets
Read More
Table of Contents How to take Screenshot in Droid Turbo?How to turn-on WiFi Hotspot in Droid Turbo?Will the…
MMobile Apps
Read More
The Apps have undoubtedly affected students’ lives. Today there are apps in the Play store solely made for…