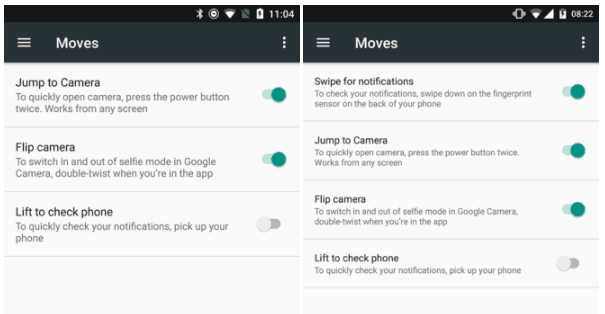 The Android 7.1.2 Nougat OS update started rolling out this week, and while there’s nothing major about it, it does do a lot for the Nexus smartphones. As of now the update is rolling out only for the Nexus and the Pixel users. The update brings in ‘bug fixes’ and ‘enhancements’ for the smartphones. The changelog does not outline much. Let us take a detailed look at the Android 7.1.2 Nougat OS update:

Nexus 5X users can now perform fingerprint gestures! In the past this was a feature exclusive to the Google Pixel and Pixel XL users. With this update to the Android OS, Nexus 5X users too, can make use of it. The users need to go to settings and navigate to moves. Over there they would find a ‘swipe for notifications’ option. It allows the users to check for notifications without removing their index finger from the back of the phone.

In November, when users of the Nexus 5X and Nexus 6P realized this is a Google Pixel exclusive feature, there was quite a dissatisfaction. With the Android 7.1.2 Nougat OS update, Google has now brought this update for the LG Nexus 5X users too.

While the Nexus 6P images are not released yet, we do not know what lies ahead. However it is likely that the update would come to the users of the Huawei Nexus 6P too, as the Google Pixel and the Nexus 6P share the same fingerprint scanner.

In the past Google had said that “same hardware doesn’t mean same capabilities, alas.” However, Google was later evaluating the options to bring in the feature to the Nexus users as well. This has finally happened with the Android 7.1.2 Nougat OS update. More updates are likely to follow in the next few days as we know more about the ‘enhancements’ that Google says are here.

AAndroid NewsMobile AppsWeb App
Read More
Few days back, I wrote an article in which I explained the steps for Extracting your WhatsApp Password,…
GGadgets
Read More
One year has passed since OnePlus began its operations in India. The company sells products in India via…
GGadgets
Read More
Chinese smartphone brand Honor has just announced its latest Android phone, the Honor View20. Boasting a 48MP camera…
SSamsungAndroid NewsGadgets
Read More
China is the biggest nation in the world when it comes to population. The country has a massive…